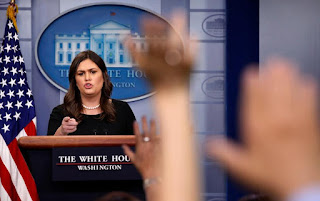 White House press secretary Sarah Huckabee Sanders calls on reporters during the daily briefing in the Briefing Room of the White House in Washington, Thursday, June 14, 2018.


WASHINGTON (AP) — The Latest on Congress and immigration legislation (all times local): 5:15 p.m. House Republicans are reviewing a discussion draft of a sweeping immigration bill that includes a visa system for young "Dreamers" and other immigrants and $25 billion for President Donald Trump's promised border wall with Mexico.

The measure released Thursday sticks to Trump's immigration priorities while trying to unite the party's conservative and moderate factions. It limits visas for extended family members and shifts to a merit-based immigration system. The young Dreamers, who have been living in the United States illegally since childhood, could apply for legal status for six years. Applicants could gain points for education or other skills. Eventually, they could apply for citizenship.

The bill beefs up enforcement of immigration laws and ends the diversity visa lottery for immigrants from underrepresented countries, among other things.

The White House says Democrats are responsible for changing the nation's immigration laws.

Press Secretary Sarah Huckabee Sanders says President Donald Trump wants to see Congress pass laws to solve the humanitarian crisis at the border. But she is laying responsibility at the feet of Democrats, even though Republicans hold the majorities of the House and Senate.

She told reporters at a contentious White House briefing Thursday that Democrats "have refused to come to the table and be part of a solution."

Instead, she says, "they're playing political games and attacking the president."

The administration is pushing a "zero tolerance" policy that is separating more children from parents who are arrested for illegally crossing the border. Democrats have called the policy "barbaric," and House Speaker Paul Ryan says he doesn't want kids separated from parents.

House Democratic Leader Nancy Pelosi says a Trump administration policy that separates children from their parents at the southern border is "barbaric" and has to stop.

Pelosi said Thursday that separating families as parents are being detained after crossing the southern border illegally "is not what America is, but this is the policy of the Trump administration."

She adds, "This is not normal. It's barbaric. It has to stop."

She says the Trump administration could "stop the practice on a dime," adding "I don't know why there aren't uprisings across the country."

Earlier, House Speaker Paul Ryan said Republicans "don't want kids to be separated from their parents," but said the policy is being dictated by a recent court ruling. He says legislation is needed to fix the problem.

House Speaker Paul Ryan says he's not comfortable with a Trump administration policy that separates children from their parents as they are being detained after crossing the southern border illegally.

Ryan says, "We don't want kids to be separated from their parents," but adds that the policy is being dictated by a recent court ruling. He says legislation is needed to fix the problem.

House Republicans are considering next steps on two immigration bills. Ryan and other GOP leaders persuaded moderate Republicans to drop a renegade effort to force votes on legislation that would have protected young "Dreamer" immigrants with a path to citizenship.

Votes on immigration bills could be held as soon as next week, although Ryan said Thursday he "won't guarantee passage" of any measure.
AP News Capitol Hill Immigrants Immigration News Desk Politics