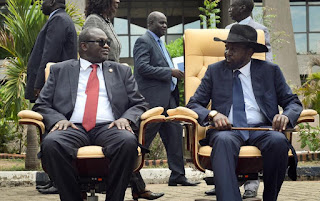 Then South Sudan's First Vice President Riek Machar, left, looks across at President Salva Kiir, right, as they sit to be photographed following the first meeting of a new transitional coalition government, in the capital Juba, South Sudan. South Sudan's warring leaders were set to meet face-to-face for the first time in almost two years on Wednesday, June 20, 2018 amid efforts to end a five-year civil war.

ADDIS ABABA, ETHIOPIA (AP) — South Sudan's warring leaders were set to meet face-to-face for the first time in almost two years on Wednesday amid efforts to end a five-year civil war. South Sudan President Salva Kiir and opposition leader Riek Machar arrived in the capital of neighboring Ethiopia, which invited them to meet as international pressure grows to end a conflict that has killed tens of thousands of people and created Africa's largest refugee crisis since the 1994 Rwanda genocide.

A Kiir spokesman, Ateny Wek Ateny, has said "anything that brings peace in South Sudan is wanted." Machar fled South Sudan after new fighting erupted in the capital in July 2016, ending a brief attempt at peace in which he returned to his role as Kiir's deputy. He later was put under house arrest in South Africa, whose presidency on Wednesday welcomed Machar's participation in the talks.

The meeting will be mediated by the East African regional bloc that has led several rounds of failed peace talks. The Intergovernmental Authority on Development last month called for a meeting of Kiir and Machar ahead of an African Union summit on July 1 in Mauritania, saying it would inform a "final decision" on Machar's participation in the peace process.

Both sides in South Sudan's civil war have been accused of widespread abuses such as gang rapes against civilians, including along ethnic lines. A number of South Sudan officials have been accused by human rights groups of profiting from the conflict and blocking the path to peace.

Early this month the U.N. Security Council adopted a United States-sponsored resolution that threatens an arms embargo on South Sudan and sanctions against six people, including the country's defense chief, if fighting doesn't stop and a political agreement reached. The resolution asks Secretary-General Antonio Guterres to report to the council on that by June 30.

Regional bloc IGAD also has threatened to submit "punitive measures" against violators of December's failed cease-fire in South Sudan, though sanctions would need approval by the bloc's heads of state and government.