Repositioning Cassava Sector Will Save Africa $1.2b 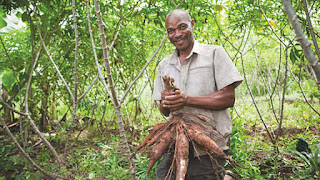 Image via The Guardian Nigeria

COTOUNOU, BENIN (THE GUARDIAN)--If the cassava sector is properly repositioned , it is capable of saving the African continent about $1.2b, which can be redirected into the continent’s domestic economies.

To achieve this, the AfDB promised to invest $120m in the next two to three years to boost productivity and transform cassava and eight other commodities in the continent.

“Transforming cassava on the African continent would help African nations to cut imports and redirect about $1.2bn into African domestic economies.”

The conference was attended by more than 450 local and international partners in the cassava sector, coming from research and development organisations, government, farming community, and the private sector.

AfDB’s investment in cassava comes at a time when African governments are scaling up efforts to end food imports and create wealth.

Fregene said cassava was a strategic crop for Africa’s food security and wealth creation for youth, and women, adding, “another dimension to the importance of cassava is in nutrition where cassava can enhance the nutrition of children directly or as feed for poultry and other livestock.”

With the largest volume of cassava coming from Africa, cassava supports more than 350 million people in Africa.

The Minister of Agriculture, Republic of Benin, Dr. Gaston Dossouhoui said cassava remained the cheapest staple consumed by Africans, adding that “addressing the constraints of cassava production will have a positive impact on African farmers.”

He lauded President of the AfDB, Dr. Akin Adesina for his commitment of investing in agriculture and cassava, in particular.