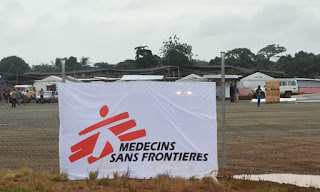 A Médecins Sans Frontières banner is seen on the fence of a hospital in Monrovia. Photograph: Zoom Dosso/AFP/Getty Images via The London Guardian


Whistleblowers claim sex workers were routinely employed by aid agency employees, one of whom suggested it was possible to swap drugs for sex


LONDON (THE GUARDIAN)--The charity Médecins Sans Frontières has been hit by allegations that aid workers for the organisation used local prostitutes while working in Africa.

Whistleblowers told the Victoria Derbyshire programme the alleged behaviour was “blatant” and “widespread” among logistical staff.

Speaking anonymously, a former employee at the aid agency said a senior colleague claimed it was possible to barter sex in exchange for medication.

She told the BBC programme: “He said it’s so easy to barter medication with these easy girls in Liberia … He was suggesting lots of the young girls who had lost their parents to the Ebola crisis would do anything sexual in return for medication.”

Another woman claimed to have seen a senior member of staff bring girls back to MSF accommodation while posted in Kenya.

She said: “The girls were very, very young and rumoured to be prostitutes.”

The woman added: “My colleague, who was staying in the same residence for a long time, felt this was a regular occurrence.”

The whistleblower said she felt unable to challenge the man “because he was quite senior”, adding: “There’s definitely a feeling that certain predatory men were seen as too big to fail.”

The claims, which have not been verified, were levelled at logistical staff and not doctors or nurses.

The allegations mark a further blow to the aid sector, which has been rocked by scandal in recent months.

Last week, Haiti announced it was withdrawing Oxfam Great Britain’s right to operate after allegations of sexual misconduct by some of the charity’s staff.

And earlier this year Save the Children’s international chairman resignedafter the charity was engulfed by allegations it failed to investigate sexual abuse by staff.

A spokesperson for MSF, which is also known as Doctors Without Borders, said: “We do not tolerate abuse, harassment or exploitation within MSF. We are sorry for any instances where people have been subjected to harassment, abuse or otherwise mistreated and/or felt that it was not adequately dealt with.

“We know that MSF is not immune to these issues and we take any reports seriously. We have mechanisms in place to prevent, detect and address staff misconduct.”

The charity said it had examined the claims made to the BBC but was unable to confirm the allegations. It urged anyone with concerns to report them through the charity’s confidential whistleblowing process.
News Desk Society The Guardian