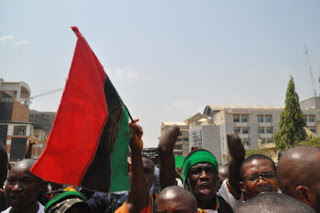 ENUGU (VANGUARD)—Indigenous People of Biafra, IPOB, has said that it has printed 40 million ballot papers to be used in the first phase of the referendum by Biafrans to determine their readiness to opt out of Nigeria.

It said the result of the exercise would guide IPOB on its future operations in the country.

IPOB said that it was opposed to restructuring of Nigeria being canvassed by some eminent Nigerians, pointing out that the first stage of its referendum would take place sometime before the end of this year.

This was contained in a statement signed by the Media and Publicity Secretary of IPOB, Emma Powerful. The statement read in part: “We the IPOB wish to bring to the attention of the world that plans are at advanced stages in preparation for the first in our three-stage referendum process towards the peaceful, non-violent restoration of the nation of Biafra.

”Our decision to hold the first of the three plebiscite later this year has vindicated IPOB’s resilience in sticking to the principles of non-violent agitation for Biafra, in the face of government brutality and treachery from enemies within.

“Efforts geared towards this first referendum is gathering unstoppable momentum with dates for the exercise to be announced imminently. Forty million ballot papers are being printed and readied for distribution to every clan and village in Biafraland for all adults over the age of 18 to express their preference.

“Through this age-old democratic process, IPOB shall return power to the long suffering, down trodden masses, to enable them determine their destiny which was cruelly taken away by successive Nigerian governments. This massive consultation exercise, will guide all future IPOB activities and hopefully, address the issue of lack of wider participation by the people which some Nigerian government agents within have often cited as their reason for working against the emergence of Biafra.

“Those that set out to mislead the populace by equating IPOB’s call for referendum as a call for war, in order to mask their betrayal of the people, will no doubt find another reason or excuse to object to this upcoming plebiscite.

“It is worth reminding Ohanaeze Ndigbo and their likes that on the 11th February 1961, Nigeria conducted a referendum for the people of Southern Cameroon to determine whether they wish to be part of Nigeria or merge with the Francophone northern Cameroon.

“This referendum resulted in the peaceful secession of the then NCNC controlled Anglophone Cameroon from Nigeria. In other words, they voted to leave Nigeria for good. That was democracy in action not war.”
Biafra News Desk Nigeria Vanguard