THE LATEST: US Deploys More Marines To Mideast Embassies 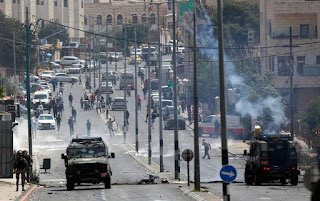 Palestinians clash with Israeli troops following a protest against the opening of the U.S. embassy in Jerusalem, in the West Bank city of Bethlehem, Monday, May 13, 2018.

The officials say the increases are temporary and will involve roughly a dozen more Marines in each location. The officials spoke on condition of anonymity to discuss troop movements. It was not clear how many Marines would be at the new embassy in Jerusalem and how many would remain at the Tel Aviv facility, which is still operating.

Capt. Ryan E. Alvis, Marine Corps spokeswoman, says a number of troops from the Marine Security Guard Security Augmentation Unit were requested as a result of current events. She did not provide numbers or location details.

—Lolita C. Baldor __ 9:45 a.m. President Donald Trump says the opening of the new U.S. embassy in Jerusalem has been a "long time coming." Trump gave a video address that aired at the opening of the new embassy Monday. He announced late last year that he would fulfill his campaign promise to move the embassy.

Trump said that the U.S. had "failed to acknowledge the obvious" for many years, adding that "today, we follow through on this recognition." Trump added that the new embassy was opening "many, many years ahead of schedule."

The embassy move has enraged the Palestinians. Trump said he remained committed to "facilitating a lasting peace agreement." Trump stressed a close bond with Israel. He also said he was "extending a hand of friendship to Israel, the Palestinians and to all of their neighbors."

President Donald Trump is offering his congratulations to Israel on Twitter.

Several of his top aides and political supporters are on hand in Jerusalem, where Trump is opening a new U.S. embassy. The relocation of America's diplomatic post from Tel Aviv has infuriated the Palestinians and fueled protests there that resulted in an estimated 37 Palestinian deaths.

Trump made no reference to the violence on his Twitter feed, instead urging people to tune in to watch the televised ceremony. He wrote: "Big day for Israel. Congratulations!"

Amid deadly clashes along the Israeli-Palestinian border, President Donald Trump's top aides and supporters are celebrating the opening of the new U.S. embassy in Jerusalem as a campaign promised fulfilled.

In a Fox News interview that made no reference to the climbing death toll, Mnuchin said Trump is "taking action" and "making difficult decisions" and "not just kicking the can down the road."