The Food Truck Serving Up West African Delights In Rome 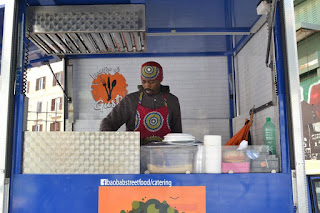 ROME (OZY)--In Rome, food is everywhere. On every corner — and in between them — there are restaurants, pizzerias, osterias and bars serving up traditional Italian fare, with pizza and gelato stalls dotting the busy streets. But what you’d likely not expect to find? An unfamiliar cuisine, served up from a food truck.

Delicious and cheap, Baobab Street Food is a mobile kitchen offering a taste of Africa in the heart of Italy. Established a year ago by four young men from Senegal, Mali, Gambia and Eritrea, the Baobab Street Food project, funded through an EU grant, aims to bring ethnic African food to Italians. “We wanted to show the beauty of African culture and share our countries’ traditions with people here,” says 35-year-old Lamine Ka from Senegal, who heads the project. The entrepreneurs met at a refugee center in central Italy. After being unemployed for years, the four decided to start their own business, while building some bridges between Italians and its immigrant populations — with delicious food.

For 4 euros, you get a plate of rice or couscous with meat or veggies. The meat option is a flavorful traditional Senegalese dish called yassa, which is stewed chicken marinated in a sauce made of oil, lemon juice and chopped onions with African ginger and mint. For vegetarians, the dish is based on a variety of seasonal grilled vegetables. A pinch of long pepper and mustard intensify the taste of this rich dish, also known as a popular hangover cure.

Because the dishes are typically served spicier than Italians are used to, Ka adapted the recipes to better suit their palate. (You can, of course, ask for a spicier version.) In any case, if you pay an additional euro, a fresh glass of baobab or mango juice will help with the heat. Regular customers claim that it takes only a few portions to adjust to the spice level — and then to want more of it. The two veggie dishes I tried were creamy yet citrusy, a pleasant explosion of flavors with just the right amount of spice.

You’ll find Baobab Street Food parked in San Lorenzo, a district popular among students and young tourists, or in the hippie district of Pigneto, as well as at social events and private parties around the city.

It hasn’t always been easy. On some occasions, Ka notes, some locals have called the police after seeing the van, with African men, in their neighborhoods. Nevertheless, the business has attracted more and more regular customers and catering clients. For the four business partners, it is a chance for a better future. That is why they named the project after Africa’s iconic baobab tree, which symbolizes life.
Africa Culinary Correctness Rome Society