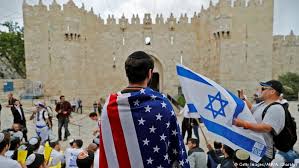 ABUJA (NEW AGENCY Of NIGERIA)--Nigeria has protested to Al Jazeera, an international news television, denouncing a report that it was represented at the official relocation of U.S embassy to Jerusalem.

The country is demanding a retraction of the story, a presidential source said on Tuesday.

The United States officially relocated its embassy from Tel Aviv to Jerusalem on Monday and sparked a row that saw the death of 55 Palestinians..

The Presidency officially disclosed that based on the report, the Minister of Foreign Affairs, M. Geoffrey Onyeama, queried the Nigerian Ambassador to Israel to explain his presence at the event.

The source said, “Based on that report, the minister queried the ambassador to explain why he attended the event.

“The ambassador has since replied that he was not at the event.

“It was on the strength of the ambassador’s response that the Federal Government wrote to Al Jazeera to retract its story.”

The U.S. on Monday officially relocated its embassy from Tel Aviv to Jerusalem, in a deeply controversial move that angered Palestinians and drew widespread global condemnation.

The ceremony took place amid road closures and heavy police presence in anticipation of Palestinian protests.

It also featured deadly demonstrations in Gaza calling for the refugees’ right to return to the homes they were forcibly expelled 70 years ago.

U.S. President Donald Trump, who in December 2017 declared Jerusalem as Israel’s capital, a move long sought by Israel, addressed the ceremony via a recorded video message.

“Today we follow through on this recognition and open our embassy in the historic and sacred land of Jerusalem, and we’re opening it many, many years ahead of schedule,” Trump has said.(NAN)
Al Jazeera Middle East Crisis News Desk Nigeria