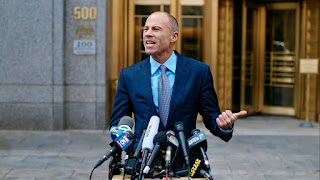 SANTA ANA, CALIF. (LA TIMES)--The law firm of Stormy Daniels' attorney Michael Avenatti was hit with a $10-million judgment Tuesday in U.S. Bankruptcy Court after he broke his promise to pay $2 million to a former colleague.

Judge Catherine Bauer of U.S. Bankruptcy Court in Santa Ana ordered the Eagan Avenatti law firm to pay the $10 million to Jason Frank, a lawyer who used to work at the Newport Beach firm.

"At this point, that's what's appropriate," Bauer said at a brief hearing.

To settle his law firm's bankruptcy, Avenatti had personally guaranteed that the $2 million would be paid to Frank last week, but both he and his firm failed to turn over the money.

At the hearing, the U.S. Justice Department revealed that Avenatti's firm has also defaulted on back taxes that it promised to pay the Internal Revenue Service under another bankruptcy settlement.

Assistant U.S. Atty. Najah Shariff told the judge that the federal government would soon file a motion demanding payment of the back taxes.

Under the Jan. 30 bankruptcy settlement, Avenatti personally agreed to pay the IRS $2.4 million in back taxes, penalties and interest, court records show.

Nearly $1.3 million of that was for payroll taxes that his law firm withheld from employees but did not turn over to the government.

Avenatti has paid at least $1.5 million of what was due, according to the U.S. attorney's office in Los Angeles. But he and his firm missed an installment that was due last week, Shariff told the court.

Avenatti, who has blamed the unpaid taxes on an unnamed payroll company, accused The Times of "purposely confusing me with a separate legal entity that has no role in the Daniels case."

"Irrelevant," he wrote in an email responding to questions about the $10-million judgment against Eagan Avenatti and the missed tax payment. "Over blown. Sensational reporting at its finest. No judgment against me was issued nor do I owe any taxes."

Mark S. Horoupian, an attorney for Avenatti's firm, told the judge that the firm was not disputing Frank's right to a $10-million judgment under the terms of the bankruptcy settlement. After the hearing, Horoupian declined to comment. 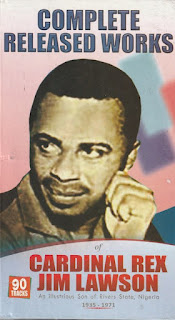 Rex Lawson: Life And Times Of A Highlife Legend

Rex Lawson image via El Sur Records BY ANTHONY ADAH ABRAHAM ANTHONY ADAH ABRAHAM writes on the legacy of the late Cardinal Rex Jim Lawson, a true legend, who left a big shoe that many highlife musicians are finding it hard to fill today. His songs “So Ala Teme,” “Bere Bote,” “Ibinabo” were and still the taste of those who are lovers of good music. The seven-year period between Nigeria’s independence in 1960 and the start of the civil war in 1967 was a golden era. The people of this multi-ethnic nation lived together harmoniously, cherished and respected one another despite the diversity of cultures and religions. The newfound independence from the British colonialists offered the citizenry the hope of building a great nation and they held this great vision as an ideal literally written on their faces. While the political sphere presented the theatre to actualise their visions, they also found time to relax and listen to native music which provided the necessary distraction f