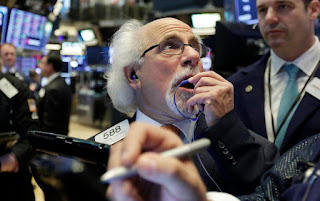 NEW YORK (AP) — Stocks in the U.S. and Europe sank Tuesday following political turmoil in Italy, which stoked fears of instability in the euro bloc. Investors sold stocks and prices for U.S. government bonds surged as investors shifted money into lower-risk investments. Bond yields dropped, and with them, interest rates on mortgages and other kinds of loans. Banks plunged as Wall Street expected they would earn thinner profits.

Major exporters like technology and industrial companies and big drug and medical device makers also skidded. Those companies depend on strong sales outside the U.S. Investors dumped Italian government bonds, driving borrowing costs sharply higher for that country and rekindling fears of more financial strain for Europe's third-largest economy. They bought German and British government bonds instead, which are seen as more stable.

The political upheaval in Italy is likely to lead to new elections in the next few months, and investors are interpreting the new vote as a referendum and that Italy could move closer to abandoning the currency if populist parties win the election. It's not clear if that would happen, but if it did, it would have major implications for the European financial system and its economy.

"Eurozone membership will be at the forefront of the next election," said Alicia Levine, the head of global investment strategy at BNY Mellon Investment Management. "Should Italy leave the eurozone, it's clearly bad for European assets and it's bad for the European banking system."

Smaller U.S. companies, which tend to be more domestically focused than the large multinationals in the Dow, fared much better than the rest of the market. The Russell 2000 index fell far less than the Dow average, giving up 3.28 points, or 0.2 percent, to 1,623.65.

The Nasdaq composite fell 37.26 points, or 0.5 percent, to 7,396.59. U.S. markets were closed Monday for the Memorial Day holiday. Italian President Sergio Mattarella picked Carlo Cottarelli for prime minister after the anti-establishment 5-Star Movement and right-wing League refused to withdraw an anti-euro candidate as economy minister. That ended their attempt to establish a government after inconclusive elections in March. Cottarelli is likely to lose a vote of no confidence in parliament, which would mean another round of elections.

Investors dumped Italian stocks and bonds as a result. Yields on Italian government bonds soared as their prices declined. The yield on the 10-year Italian government bond jumped to 3.10 percent from 2.69 percent, a huge move. At the beginning of May the yield was just 1.78 percent. The sharp move higher reflects weakening confidence among investors in Italy's government.

Spain was facing political turbulence of its own. That country's parliament will hold a vote of no confidence in Prime Minister Mariano Rajoy after graft convictions of businesspeople and officials tied to his conservative Popular Party. The Spanish IBEX 35 sank 2.5 percent.

U.S. government bond prices jumped as investors moved money into lower-risk assets. The yield on the 10-year Treasury fell to 2.78 percent, its lowest since early April, from 2.93 percent. JPMorgan Chase dropped 4.3 percent to $105.93 and Bank of America fell 4 percent to $28.96.