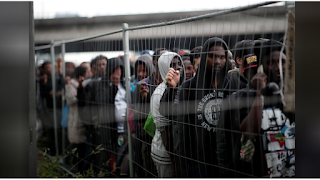 Migrants with their belongings stand in line as French police evacuate hundreds of migrants living in makeshift camps in Paris, France, May 30, 2018. REUTERS/Benoit Tessier


PARIS (REUTERS) - Police began evacuating hundreds of migrants living in makeshift camps in Paris on Wednesday, as European politicians continue to tackle the issue of refugees, which has fueled the rise of far-right parties in the continent.

Reuters Television pictures showed scores of migrants, from the “Millenaire” camp next to a canal in northeast Paris, waiting to be escorted to temporary accommodation centers. Riot police were also on standby as the evacuation took place.

France has undertaken previous measures to clear out migrant camps in Paris, only for new camps to spring up again.

Europe has faced a migrant crisis since 2015 following wars in Libya and Syria, and more than 1 million people from Africa and the Middle East have tried to reach the continent via Turkey or by sea.

French President Emmanuel Macron’s government has said it wants to be both firm and fair on immigration but it took a tougher stance lately, with parliament approving a bill that tightens asylum rules.