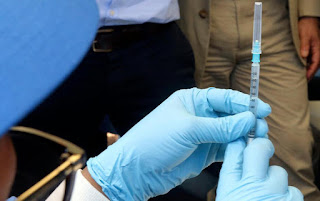 Dozens of health workers in the northwestern provincial capital, Mbandaka, have received vaccinations amid expectations that some will be deployed to the rural epicenter of the epidemic. Front-line workers are especially at risk of contracting the virus, which spreads in contact with the bodily fluids of infected people, including the dead.

The death toll from hemorrhagic fever stands at 27, with three of them confirmed as Ebola. Two of the Ebola victims were nurses, one in Iboko and the other in Bikoro. "Concerned about Iboko as access remains difficult," Dr. Peter Salama, the World Health Organization's emergency response chief, said Tuesday on Twitter. Roads in the region are unpaved and infrastructure is poor.

The WHO said 33 people received the first vaccinations Monday, including a few people in two communities of Mbandaka. More than 7,500 doses are available in Congo, WHO said Monday, and another 8,000 doses will be available in the coming days.

Allowing Congolese to watch health officials receive vaccinations is crucial, health worker Ezela Elange told The Associated Press. "Our hope is that ... the sick will heal, the whole province will be healed," Elange said.

The vaccination campaign eventually will move to cover the two other health zones where confirmed cases have been reported. A major challenge will be keeping the vaccines cold in this vast, impoverished, tropical country where electricity is patchy.

The vaccine, provided by U.S. company Merck, is still in the test stages but it was effective toward the end of the Ebola epidemic that killed more than 11,300 people in Guinea, Sierra Leone and Liberia from 2014 to 2016.

Those who are vaccinated in outbreak areas still will have to strictly follow infection-control measures, especially since the vaccine doesn't protect immediately. It takes a week to 10 days, said Dr. Pierre Rollin, an epidemiologist with the U.S. Centers for Disease Control and Prevention and a veteran of more than a dozen Ebola outbreaks.

Rollin warned that the large geographic area between Mbandaka and the remote towns where the outbreak's first cases were reported must be scoured for the infected and the people who have come into contact with them.

"Travel from Mbandaka to Bikoro can take four hours to four days" depending on transportation and if it's raining, he said. "Before making any assumption we're going to have to look along this road and all the villages."

The U.S. Agency for International Development on Tuesday said it was contributing another up to $7 million to combat the outbreak on top of the $1 million it committed last week. The International Federation of Red Cross and Red Crescent Societies in Congo warned that the outbreak is far from over. It said it will expand operations for community-based surveillance and safe burials.

"The risk of spreading within the country and to neighboring nations remains real," said Dr. Fatoumata Nafo-Traore, IFRC's regional director for Africa. This is Congo's ninth Ebola outbreak since 1976, when the disease was first identified. While all of the outbreaks were based in remote rural areas the virus has twice made it to Kinshasa, the capital of 10 million people, but was effectively contained.

Mbandaka is an hour's flight from Kinshasa and several days' travel by barge. There is no specific treatment for Ebola. Symptoms include fever, vomiting, diarrhea, muscle pain and at times internal and external bleeding. The virus can be fatal in up to 90 percent of cases, depending on the strain.