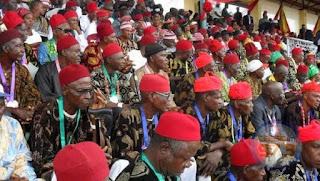 Traditional rulers under the aegis of Ohaneze Ndi-Igbo. Image via NAN

AWKA, ANAMBRA STATE (NAN)--Chief Damian Okeke-Ogene, Anambra State, President of Ohaneze Ndigbo, has called on the Igbo race to adopt a collective stand on the affairs affecting them, especially on the ongoing conversation on restructuring.

Okeke-Ogene made the call on Monday in an interview with the News Agency of Nigeria (NAN) in Awka at the sidelines of the ongoing Igbo Summit by the group.

Ohaneze Ndigbo is an apex Igbo socio-cultural group that represents all Igbo communities within and outside Nigeria.

He said that the question on whether or not to restructure the politico-economic arrangement of Nigeria had remained a major discussion since the 2014 National Conference and the Igbos needed to be an integral part of it.

He said the group was therefore holding the summit tagged: “Restructuring the pre-independence arrangement of encouraging autonomous regional growth and development’’ to bring to the front burner issues on restructuring as they affect the Igbo race.

Okeke-Ogene said that the summit would unite the Igbos in speaking with one voice on issues affecting their wellbeing and proffer possible ways to move them forward.

He said the Igbo summit should not be missed by any Igbo indigene under any guise.

“The debate for restructuring of Nigeria has been on and Ndigbo are set to harmonise their views during this summit being organised by the Ohaneze group,’’ he said.

He expressed gratitude to Anambra government for sending the Secretary to the State Government Prof. Solo Chukwulobelu, who was on hand to monitor the progress of the summit.

Okeke-Ogene, however, debunked the story of cancellation of the summit based on the threat of the IPOB.

He reassured participants of their safety as security operatives were on ground to secure the place.
Igbo Igbo Politics Nigeria Society