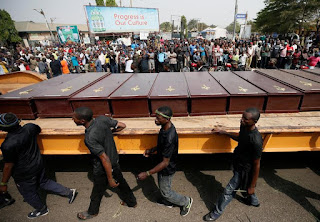 Men march along a truck carrying the coffins of people killed in Makurdi, Nigeria January 11, 2018. © 2018 Reuters via Human Rights Watch

Nigerian civil society groups declared today a national day of mourning and remembrance to honor the victims of violence across the country.

The group, the Civil Society Joint Nigeria Crisis Action Committee, estimates that 1,917 people were killed in violent attacks by suspected cattle herdsmen, by armed bandits and in incidents of communal clashes between January to May. The observation of a minute of silence at noon today is to call attention to the inadequate response of Nigerian security agencies to the epidemic of violence, a response that’s been criticized as slow and inefficient.

The decades-long conflict in north central Nigeria which has been marked by cycles of reprisal killings between nomadic herdsmen and local farming communities, intensified in 2018. Hundreds of people have been killed, thousands displaced, children forced out of school, properties and businesses destroyed.

In a 2013 report, Human Rights Watch documented the inter-communal violence in Plateau and Kaduna States. The report slammed the government for failing to thoroughly investigate, prosecute and punish perpetrators as a factor fueling the recurring crisis in the region. The report called out the government for its failure to address the underlying social, economic and political causes of the violence.

Communal conflict, stoked by vigilantism, banditry, and competing livelihood claims to land and other resources by the warring groups, has plagued this region for many years. The violence has since spread to other states in Nigeria, including, Abia, Adamawa, Benue, Imo, Kogi, Nasarawa, Taraba, and Zamfara. Human Rights Watch found in 2014, that intervention by security forces made things worse in some cases.

In January, the government announced plans to adopt a Cattle Colony Policy as a solution to the frequent clashes between herdsmen and local farmers. The controversial plan would have designated vast tracks of land for herding cattle in each state, but it was rejected by several state leaders.

Nigerian authorities’ response to the violence has so far led to little concrete and meaningful change. The call of civil society groups today is a demand for government action; the administration of President Muhammadu Buhari would do well to heed it.
Human Rights Nigeria Society