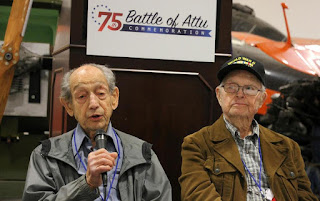 World War II veterans Allan Seroll, left, of Massachusetts, and William Roy Dover, right, of Alabama, right, attend a 75th anniversary celebration of the Battle of Attu in Anchorage, Alaska. Dover was an American soldier who took part in the May 1943 effort to reclaim Alaska's Attu Island from the Japanese. It was the only World War II battle fought on North American soil.

ANCHORAGE, ALASKA (AP) — The only World War II battle fought on North American soil was waged 75 years ago this month on Attu Island in Alaska's Aleutian Islands. Japan had invaded both Attu and Kiska islands in 1942.

American forces began the 19-day campaign to reclaim Attu in May 1943. It is known as the forgotten battle of World War II. American forces reclaimed the island May 30, 1943. But the deciding battle started a day earlier when dwindling Japanese forces staged a last-ditch attack on American forces at Engineer Hill. About 200 of the soldiers died, and another 500 Japanese forces committed suicide rather than being taken prisoner.

In the end, about 2,500 Japanese died on Attu Island, and only 28 were taken as POWs. About 550 American forces were killed. 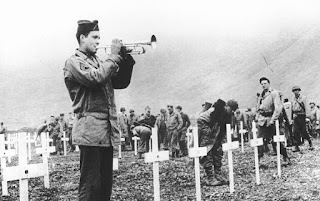 In this Aug. 1943 file photo, a bugler sounds taps during a memorial service while a group of G.I.s visit the graves of comrades who fell in the reconquest of Attu Island, part of the Aleutian Islands of Alaska. May 30, 2018 will mark the 75th anniversary of American forces recapturing Attu Island in Alaska's Aleutian chain from Japanese forces. It was the only World War II battle fought on North American soil.
AP News News Desk Society