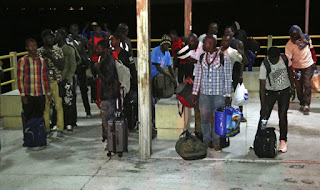 In this photo released by Maranhao state, African migrants arrive after being rescued by fishermen, at the pier in Sao Jose de Ribamar, Brazil, Sunday. | CARLINHOS PEREIRA / MARANHAO STATE GOVERNMENT / VIA AP


SAO PAULO, BRAZIL (AP)--Authorities say about two dozen African migrants have come ashore in northeastern Brazil after being rescued at sea by fishermen.

The government of Maranhao state said Sunday the group of 25 people from Senegal, Nigeria, Guinea, Sierra Leone and Cape Verde landed Saturday. Two Brazilians were also among those rescued.

The government said the 27 people were dehydrated and received medical care and meals.

Federal police are looking into whether any crimes were committed against the group. That could mean there is suspicion they were exploited by people who smuggle migrants. The G1 news portal reported the migrants’ boat was adrift for weeks.

Every year, tens of thousands of people from Africa and the Middle East try to reach Europe in smugglers’ boats. But such journeys to Brazil are rare.