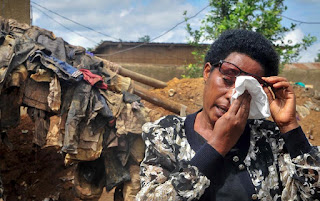 France Mukantagazwa, who lost her father and other relatives in the genocide and believes their bodies may be in the newly found graves, sheds a tear as she speaks to media at the site of the recently-discovered mass grave in Gasabo district, near the capital Kigali, in Rwanda Thursday, April 26, 2018. Mass graves that authorities say could contain more than 2,000 bodies have been discovered in Rwanda nearly a quarter-century after the country's genocide.

KIGALI, RWANDA (AP) — Mass graves that authorities say could contain more than 2,000 bodies have been discovered in Rwanda nearly a quarter-century after the country's genocide, and further graves are being sought nearby.

The new discovery is being called the most significant in a long time in this East African nation that is still recovering from the 1994 killings of more than 800,000 people. Some Rwandans are shocked and dismayed that residents of the community outside the capital, Kigali, where the mass graves were found kept quiet about them for so many years.

"Those who participated in the killing of our relatives don't want to tell us where they buried them. How can you reconcile with such people?" asked a tearful France Mukantagazwa. She told The Associated Press she lost her father and other relatives in the genocide and believes their bodies are in the newly found graves.

The discovery of the graves in Gasabo district came just days after Rwanda marked 24 years since the mass killings of ethnic Tutsi and moderate ethnic Hutus. "It is very disturbing that every now and then mass graves are discovered of which the now-free perpetrators never bothered to reveal to bereaved families so that they can get closure," the daily newspaper The New Times said in an editorial this week.

"Definitely some very cruel people still live in our midst," it added. Between 2,000 and 3,000 people are thought to be buried in the graves based on the number of area residents who went missing during the genocide, Rashid Rwigamba, an official with the genocide survivors' organization Ibuka, told AP.

The information leading to the discovery came from a local landlord who at first refused to answer questions about the suspected mass graves until threatened with arrest, Rwigamba said. The landlord was later arrested, suspected of taking part in the killings and accused of knowing where people had been buried all along, he added.

Houses and toilets that had been built on top of the graves have been destroyed to make way for the search. "The exercise is ongoing and we have identified another house we suspect was built on a piece of land where victims were buried," Rwigamba said.

It was not immediately clear what would be done with the bodies or the graves. During the genocide, a roadblock manned by Hutu militias was established meters away from the sites of the mass graves, survivors told the AP.

Authorities have launched investigations and those found to have participated in the killings will be prosecuted, Kabagambire said.