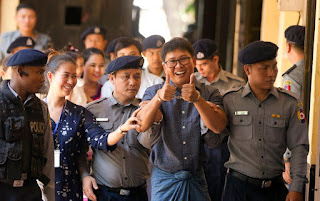 Reuters journalist Wa Lone, center, walks along with his wife Pan Ei Mon, second left, as he is escorted by police upon arrival at his trial Wednesday, April.11, 2018, Yangon, Myanmar.

YANGON, MYANMAR (AP) — A Myanmar court on Wednesday refused to dismiss a case against two Reuters journalists after the reporters' lawyers insisted last week that the evidence doesn't support the charges.

The case against Wa Lone and Kyaw Soe Oo has been strongly criticized internationally as an effort by authorities to intimidate the press, especially its coverage of the sensitive situation in Myanmar's Rakhine state, where the military is accused of massive human rights abuses against the Muslim Rohingya minority.

The two journalists were arrested Dec. 12, with police accusing them of violating the Official Secrets Act, a law dating from British colonial times, by acquiring "important secret papers" handed to them by two policemen who worked in Rakhine. If convicted, they could get up to 14 years in prison.

The two had worked on Reuters' coverage of the crisis in Rakhine, where security forces' response to a Muslim insurgents' attack have driven nearly 700,000 Rohingya to neighboring Bangladesh. On Tuesday, Myanmar's military announced it had sentenced seven soldiers to 10 years in prison for their part in killings, a case covered by the two reporters, a development both referenced as they left court, contrasting the sentence the soldiers received to the maximum sentence they might receive.

"We journalists just did our job as we have the rights of free press in the democracy and now we are facing the charge that could probably put us in prison for 14 years," Wa Lone shouted out. "I'm not happy at all," Kyaw Soe Oo said. "The men who carried out the killings were just sentenced and they only got 10 years. Do you think that's fair?"

The case has drawn international attention, with high-profile rights lawyer Amal Clooney joining the legal team representing the jailed journalists. The United States, Britain and Canada, as well as the United Nations, have called for the reporters to be freed.

"Everybody knows it's unfair," said Wa Lone's wife, Pan Ei Mon. "I want them to be released soon. In front of my husband, I always pretend I'm OK, and I am tired of it." The defense lawyers asked the judge last week to dismiss the charges after four months of preliminary hearings, saying testimony from prosecution witnesses did not give enough evidence to prove the pair violated the law.

"The judge said that eight more witnesses are still left to testify and our claims of baseless evidence from persecution witnesses are not yet true," Than Zaw Aung, one of the defense lawyers, said after Wednesday's hearing.

Reuters President and Editor-in-Chief Stephen J. Adler said he was disappointed with the court's decision. "We believe that there are solid grounds for the court to dismiss this matter and to release our journalists," Adler said in a statement. "Wa Lone and Kyaw Soe Oo were reporting on issues in Myanmar in an independent and impartial way. They have not violated any laws in the course of their newsgathering and were simply doing their jobs. We will continue to do all we can to secure their release."

Than Zaw Aung said the next hearing is set for April 20.