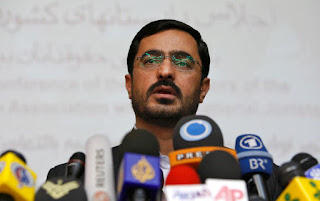 Tehran former prosecutor Saeed Mortazavi, speaks to the media at a news conference in Tehran, Iran. Iran's official judicial news agency is reporting that police have arrested the former Tehran prosecutor who faces a two-year prison sentence over the death of prisoners following the country's 2009 protests.

TEHRAN, IRAN (AP) — Iranian police have arrested a former prosecutor known as the "torturer of Tehran," who faces a two-year jail term over the death of prisoners following protests in 2009, Iranian media reported on Sunday.

The official website of the judiciary, Mizanonline.com, said former Tehran prosecutor Saeed Mortazavi has been arrested, without elaborating. The semi-official Tasnim news agency said police detained Mortazavi in a villa in northern Iran, near the Caspian Sea.

Mortazavi was sentenced to prison by an appeals court in December. That court found him guilty of "aiding and abetting" the torture and deaths of protesters arrested after the disputed re-election of hard-line President Mahmoud Ahmadinejad.

Since that court decision, Mortazavi apparently couldn't be found by authorities. "They could not find him despite the arrest warrant," judiciary spokesman Gholamhossein Mohseni Ejehi said last week. After the reports of his disappearance, wanted posters printed by activists began appearing around Tehran.

Mortazavi's wife and lawyer denied he was missing, but said he intends to appeal the ruling. His lawyer could not be immediately reached Sunday. Canada has blamed Mortazavi for the death in custody of Iranian-Canadian photojournalist Zahra Kazemi in 2003. Iranian reformists accused Mortazavi of trying to stage a cover-up because it was he who reported that Kazemi had died of a stroke.

A government committee probing her death later found that she had died of a fractured skull and a brain hemorrhage from a blow to the head. No charges were filed against Mortazavi. He is detested by those pushing for social and political reforms and critics have dubbed him the "butcher of the press," and the "torturer of Tehran." He was behind the closure of some 120 newspapers and the jailing of many journalists and political activists over the past decade.
AP News Iran News Desk Society