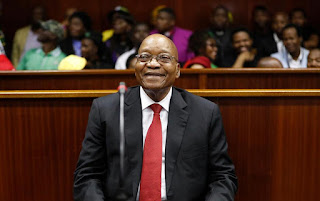 DURBAN, SOUTH AFRICA (AP) — Former South African president Jacob Zuma sat in the dock of a packed courtroom on Friday to face corruption charges and emerged defiant, telling supporters that the case against him was politically motivated.

Zuma, 75, appeared relaxed during the brief hearing at which his case was adjourned until June 8. While a lengthy court battle is expected, the spectacle of Zuma appearing before a judge less than two months after his resignation was a victory for opposition figures and activists who have fought for years to call him to account.

Sixteen charges of fraud, racketeering and money laundering were recently reinstated after being thrown out nearly a decade ago. They relate to an arms deal in the 1990s, when Zuma was deputy president. The case fueled the public anger that finally forced Zuma from power in February, though other scandals hurt him and the ruling African National Congress party that eventually instructed him to resign.

At the hearing, Judge Themba Sishi said Zuma was free "on warning." He could face several years in prison. State prosecutor Billy Downer suggested that Zuma's trial start on Nov. 12, though a lawyer for Zuma said the defense would not agree to any trial date for now. In the meantime, the defense is expected to challenge a decision by the National Prosecuting Authority to reinstate the charges against the former president.

Outside the courthouse, Zuma sang and swayed on a stage before a large group of supporters, many sporting regalia of the ANC party. He told the crowd that he was the victim of a political vendetta and that he has campaigned for the economic rights of South Africa's black majority since the end of apartheid in 1994. The message resonates among many people who resent the fact that much of the economy remains in the hands of the white minority despite the advent of democracy.

"When a person is being accused of a crime, that doesn't mean that they've been found guilty. That person still has their rights just like anybody else," Zuma said. The court hearing occurred in the coastal city of Durban in Zuma's home province of KwaZulu-Natal province, a stronghold of his support.

"Hands off Zuma," his backers chanted. Also in the dock was a representative of Thales, a French defense company accused of paying bribes to Zuma in the arms deal. Zuma's financial adviser at the time, Schabir Shaik, was convicted of corruption in the case in 2005 and sentenced to 15 years in prison. He was released after two years on medical parole.

Zuma was replaced as president by his deputy, Cyril Ramaphosa, who has promised a robust campaign against corruption and seeks to rebuild a ruling party whose moral stature has diminished since taking power at the end of apartheid.

In another scandal linked to Zuma, South African authorities seek to arrest members of the Gupta business family, which allegedly used its connections to Zuma to influence Cabinet appointments and win state contracts.

Also, South Africa's top court ruled in 2016 that Zuma violated the constitution following an investigation of multi-million-dollar upgrades to his private home using state funds. He paid back some of the money.