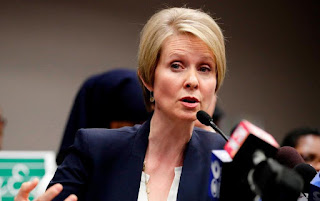 New York Democratic gubernatorial candidate Cynthia Nixon responds to a question during a news conference in Albany, N.Y. Nixon, who has never held an elected office, is challenging Cuomo, a two-term incumbent, for the Democratic Party nomination in September.

During an interview on "The Wendy Williams Show," taped Tuesday in Manhattan, Nixon called black women the "cornerstone" and "backbone" of the Democratic Party, before adding, "we need to let them lead."

But, the "Sex and the City" star said, black women will stop showing up for the Democratic Party "if the Democratic Party doesn't start showing up for them." Her comment came after she mentioned that "an amazing African American woman:" — Andrea Stewart-Cousins — wasn't included in weeks of closed-door talks that led to last Sunday's passage of the budget. Stewart-Cousins, of Yonkers, leads the Senate's mainstream Democrats.

She wasn't included in the so-called "four men in a room" negotiations in which Democratic Gov. Andrew Cuomo, the Democratic Assembly speaker, the leader of Senate Republicans and the leader of a breakaway Democratic faction hammered out a $168.3 billion spending plan.

Nixon, who has never held an elected office, is challenging Cuomo, a two-term incumbent, for the Democratic Party nomination in September. Cuomo defended his record during an interview aired on NY1 Tuesday night, saying his is better than any other New York governor in modern history, which would include his father, Mario, who was governor from 1983-1994.

Nixon was scheduled Wednesday afternoon to make her first public upstate appearance outside Albany since announcing her run. She planned to meet with environmental activists and residents of Hoosick Falls, a village near the Vermont border whose drinking water was contaminated by toxic chemicals.