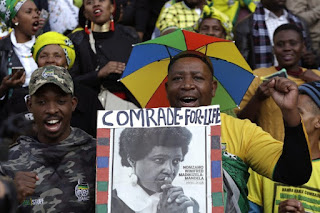 Anti-apartheid activist Winnie Madikizela-Mandela has been buried in Johannesburg following an emotional five-hour funeral attended by tens of thousands of mourners.

The casket, draped in a South African flag, was taken to the private cemetery in a motorcade escorted by members of the military.

President Cyril Ramaphosa, who had delivered the eulogy, attended the private burial, sitting among members of Madikizela-Mandela’s family.

Family and friends wept as a military band played and the casket was lowered into the ground. Madikizela-Mandela died April 2 at age 81.

“Proud, defiant, articulate, she exposed the lie of apartheid,” President Cyril Ramaphosa said before a packed stadium at the official funeral, the highest-level one the country affords to a non-head of state.

He says the detention, torture and years of banishment that Madikizela-Mandela endured “emboldened” her as a political activist, but also inflicted “deep wounds” that never healed and went largely ignored by many peers.

“She bore witness to our suffering . We did not do the same for her,” Ramaphosa said.

And he recited Maya Angelou’s poem “Still I Rise.”

The elder daughter of anti-apartheid icon Winnie Madikizela-Mandela has passionately defended her mother’s legacy against detractors during her official funeral.

“Long before it was fashionable to call for Nelson Mandela’s release from Robben Island, it was my mother who kept his memory alive,” Zenani Mandela-Dlamini said as the audience packing a 40,000-seat stadium erupted in cheers.

Since her death April 2 at 81, many South Africans have fiercely stood up for Madikizela-Mandela’s memory against critics who have characterized her as a problematic figure who was implicated in political violence after she returned from years of banishment in a rural town.

Her daughter referred to a social media campaign that has swept South Africa since her death — “Winnie has not died, she multiplied” — in which young women post pictures of themselves in doeks, the traditional head scarf that Madikizela-Mandela often wore.

Dlamini-Mandela accused the media of being complicit in a long “smear campaign” against her mother. “Praising her now that she’s gone shows what hypocrites you are . It’s become clear that South Africa, and indeed the world, holds men and women to different standards of morality.”

A packed stadium has broken out in cheers and shouts of “Winnie!” as the casket of anti-apartheid icon Winnie Madikizela-Mandela is walked in slowly for her official funeral.

The funeral is the highest level that South Africa accords for someone who was not head of state. Madikizela-Mandela died on April 2 at 81.

President Cyril Ramaphosa is sitting next to the two daughters of Madikizela-Mandela and Nelson Mandela.

Much of the stadium is filled with supporters of the ruling African National Congress party, the former liberation movement that Madikizela-Mandela had a rocky relationship with in recent years.

Millions of South Africans are preparing to say goodbye to anti-apartheid icon Winnie Madikizela-Mandela as her emotionally charged official funeral begins in Soweto, where she lived until her death on April 2 at 81.

Thousands of mourners have packed a 40,000-seat stadium to bid farewell to the powerful figure who will be buried as a national hero, after lively debate over how she should be remembered.

Often called the “Mother of the Nation” and “Mama Winnie,” Madikizela-Mandela fought to keep South Africa’s anti-apartheid struggle in the international spotlight while her husband, Nelson Mandela, was imprisoned.

Condolences have poured in from around the world in remembrance of one of the 20th century’s most prominent political activists.