A Sense Of Direction For Africa 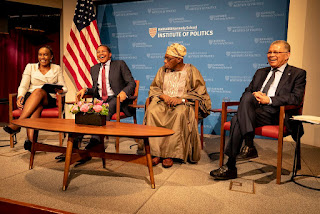 Moderator Thoko Moyo, associate dean for communications and public affairs at HKS, began the conversation, titled “Public Leadership and Africa’s Developmental Agenda,” by noting a divide in American narratives about Africa — “land of plenty on a fast track to prosperity” or “basket case” of famines and corruption. She asked the panel to respond in particular to the second misconception.

“Whoever says there is nothing good in Africa does not get that from the context of history,” said Kikwete, adding: “When you compare Africa with other continents, we are still left behind. But compared to where we were, there has been significant progress.”

Veiga cited Cape Verde’s shift to a democratic system. “I am proud of having worked with many people to change the single-party system to a democratic one. The lives of people were improved.”

One step for the future, Obasanjo said, would be putting oil and mineral resources to better use. “Whatever we export, we do not add value. We are exporting commodities in raw form and not really taking advantage.”

“He was a great Nigerian and a great African,” he said. “But I am wary of painting everything with such a broad brush.”

Before Obasanjo took office, in 1999, Nigeria endured a history of violent coups — a problem he solved by removing 93 military officials from power. No longer commanding respect without their uniforms, they were less likely to pose a threat.

The rapport between the guests made for some lively exchanges. One came in response to Moyo invoking former President Barack Obama’s statement that Africa needs strong institutions rather than strong leaders.

“I’m not sure what context he said that in,” Kikwete replied.

“Whatever the context, he was wrong,” Obasanjo interjected.

Strong leaders and strong institutions are equally important, they agreed.

“When you have strong leaders and weak institutions, you have dictatorships,” Kikwete said.

During the audience questions, one attendee from South Africa asked about the influence of Nelson Mandela. This brought a tribute from Obasanjo.

“If there was a man who made a strong impression on me the first time, Mandela did. He was put into prison for 27 years for doing nothing, other than fighting for what is right. And he forgives those who put him into prison — that requires something far more than a normal human being would be able to do. That’s something we don’t get enough of from our fellow human beings: love and forgiveness.”
Africa Cape Verde Nigeria Olusegun Obasanjo Society Tanzania