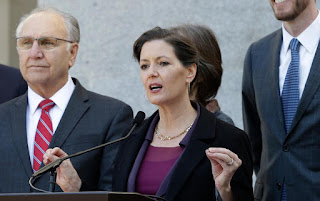 Oakland Mayor, Libby Schaaf, center, discusses California's growing homeless crisis at a news conference in Sacramento, Calif. Schaaf has been at odds with U.S. Attorney General Jeff Sessions and federal immigration officials after warning last month about potential raids in Oakland. Sessions will be speaking before the California Peace Officers Association, Wednesday, March 7, to make what's being billed as a major announcement about sanctuary policy.

WASHINGTON (AP) — The Trump administration on Tuesday sued to block California laws that extend protections to people living in the U.S. illegally, the most aggressive move yet in its push to force so-called sanctuary cities and states to cooperate with immigration authorities. California officials remained characteristically defiant, vowing to defend their landmark legislation.

The Justice Department argued a trio of state laws that, among other things, bar police from asking people about their citizenship status or participating in federal immigration enforcement activities are unconstitutional and have kept federal agents from doing their jobs. The lawsuit named as defendants the state of California, Gov. Jerry Brown and Attorney General Xavier Becerra.

"I say, bring it on," said California Senate President Pro Tem Kevin de Leon, a Los Angeles Democrat who wrote the sanctuary state bill. It is the latest salvo in an escalating feud between the Trump administration and California, which has resisted the president on issues like taxes and marijuana policy and defiantly refuses to help federal agents detain and deport undocumented immigrants. U.S. Immigration and Customs Enforcement has said it will increase its presence in California, and Attorney General Jeff Sessions wants to cut off funding to jurisdictions that won't cooperate.

The lawsuit was filed as the Justice Department is also reviewing Oakland Mayor Libby Schaaf's decision to warn of an immigration sweep in advance, which ICE said allowed hundreds of immigrants to elude detention. Schaaf said Tuesday the city would "continue to inform all residents about their constitutional rights."

The state laws being challenged were a response to President Donald Trump's hawkish immigration policies and widespread fear in immigrant communities following a campaign in which he promised to sharply ramp up the deportation of people living in the U.S. illegally. The decision to sue California shows Sessions and Trump remain aligned on this priority, even as their relationship has recently deteriorated, with Trump attacking his attorney general and Sessions pushing back.
California Society United States