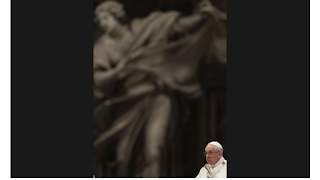 Pope Francis delivers his message as he presides over a solemn Easter vigil ceremony in St. Peters Basilica at the Vatican, Saturday, March 31, 2018. Image: Gregorio Borgial/AP

VATICAN CITY (AP) — Pope Francis on Saturday urged Catholics to not remain paralyzed in the face of the injustices around them as he baptized eight adults, including a Nigerian beggar who became a hero in Italy for having disarmed a thief with his bare hands.

In an Easter Vigil homily, Francis challenged Catholics to not remain silent, as Jesus' disciples were after his crucifixion. Rather, he urged Catholics to "break out" of their routines and let God in.

It wasn't clear if he had a particular reference in mind, but John Ogah certainly didn't stand by speechless as he witnessed a supermarket robbery on Sept. 26.


According to Italian news reports, Ogah had been begging for spare change outside the Carrefour market in Rome's Centocelle neighborhood when a masked thief, armed with a meat cleaver, tried to make off with 400 euros ($493) he had stolen from the cashiers.

Security cameras captured Ogah's courageous next steps: With nothing more than his bare hands, he confronted the thief, wrested the cleaver away and held him by the collar until police arrived, after the man fell from his attempted getaway motorcycle.

Ogah then disappeared, fearing he would be deported because he didn't have his papers in order. But Rome police authorities sought to reward his courage and within a month had given him a coveted Italian residency permit that had been denied him when his asylum bid failed.

According to the ANSA news agency, he now has a job with the Italian Red Cross and a place to call home. In preparing for his baptism, he reportedly asked the Rome police captain who handled his case to be his godfather.

In an interview soon after the theft, Ogah told La Repubblica newspaper that his dream was to be legally resident in Italy and have a job so he wouldn't have to beg to support his child back home in Nigeria. Ogah had left Nigeria and, after a stay in Libya, set off for Italy on a migrant smuggler's boat in May 2014.


"If Pope Francis or the president of the republic could do something for me I would be the happiest man in the world," he was quoted as saying. "I don't want to be a hero. I just want to be legal, work and have a dignified life in Italy."

On Saturday, Francis baptized him during the solemn pomp of one of the holiest nights in the Catholic liturgical calendar.