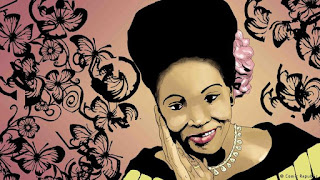 (DEUTSCHE WELLE) -- She was strong. She was outspoken. She didn't just open doors for women, she kicked them down. The Nigerian women's rights activist and politician, Margaret Ekpo, helped change the face of politics in Nigeria.

When and where did Margaret Ekpo live?

Margaret Ekpo was born in 1924 in the muddy settlement of Creek Town in Cross River State, southeastern Nigeria. At the time, Nigeria was ruled by the British and women weren't allowed to vote. Ekpo died aged 92 in 2006 in Calabar, Cross River State.

What was remarkable about Margaret Ekpo?

Ekpo is particularly remembered for mobilizing women rich and poor to fight for their economic and political rights and participate in politics. She also tirelessly agitated for Nigerian independence. She became one of the country's first female elected politicians and continued to push to advance the role of women while she was a politician.

In the 1940s, Ekpo, whose husband was a doctor, started attending meetings to protest the treatment of indigenous medical staff by the British colonial authorities.

In 1946, she founded the Market Women Association to unionize women in the city of Aba in Nigeria's Abia State, where she was then living with her husband.

In this period, Ekpo also became active in Nigeria's struggle against colonialism, joining the National Council of Nigeria and the Cameroons party. The party later nominated Ekpo as a special member of the influential regional House of Chiefs to represent women.

After Nigeria's independence from Britain in 1960, Ekpo became an elected politician in the Eastern Regional House of Assembly. She was the first woman in Aba, and one of the few female politicians in the country, to be elected to such an office.

How did Margaret Ekpo improve the standing of women in society?

In an interview with DW, Etubong Essien, a contemporary of Ekpo, said Margaret was directly responsible for more women entering politics.

"She was very active, very outspoken also. During that time, most of the women did not take to politics but she urged them. They came into politics and they were given positions, particularly those who succeeded to be elected into the house."

As a politician, Ekpo continued to fight to better the economic and political situation for women, for example, by pushing for improvements to roads leading to markets.

Ekpo was an elected politician until the start of the Nigerian civil war in 1967. During the war, she was detained by Biafran authorities for three years, at one point becoming quite ill for lack of adequate food.

In 2001, Nigeria's then president, Olusegun Obasanjo, renamed the airport in Calabar, a city near her birthplace of Creek Town, after Ekpo as a tribute to her contribution to the advancement of the country. It is now called the Margaret Ekpo International Airport.

Pinado Abdu-Waba and Gwendolin Hilse contributed to this package. It is part of DW's special series "African Roots", dedicated to African history, a cooperation with the Gerda Henkel Foundation.
Culture Nigeria Society