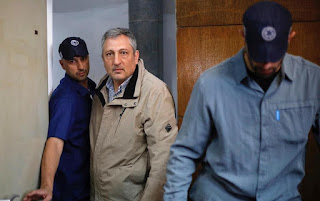 Nir Hefetz, a longtime media adviser to Israeli Prime Minister Benjamin Netanyahu and his family, arrives to a Magistrate court in Tel Aviv, Israel. Israeli media say a third confidant of Netanyahu agreed to turn state witness and testify against the prime minister, who faces a wave of corruption allegations. Various outlets say Hefetz agreed Monday, March 5, 2018 to testify in return for a more lenient punishment.

JERUSALEM (AP) — A confidant of Benjamin Netanyahu on Monday agreed to turn state's witness in a burgeoning corruption case, becoming the third former aide to testify against the Israeli leader in a series of scandals and casting a shadow over a high-profile visit to the White House.

Hefetz was arrested two weeks ago on suspicion of helping promote regulation worth hundreds of millions of dollars to Israel's Bezeq telecom company in return for favorable coverage of Netanyahu and his family by the company's popular news website.

He was released on Sunday, a day before Monday's dramatic development. Shlomo Filber, another long-time confidant to Netanyahu, has also agreed to be a state witness in the case. Netanyahu has denied any wrongdoing and has not been named a suspect in the case, but he was questioned by police on Friday ahead of his trip to Washington.

The White House meeting with Trump provides a welcome diversion for Netanyahu and a chance to shore up his base, which remains firmly behind him. But even with an embrace from Trump, and an expected warm welcome at the pro-Israel lobbying group AIPAC's annual conference on Tuesday, Netanyahu will have a difficult time escaping the growing scandals back home.

Israeli police have already recommended indicting Netanyahu for bribery, fraud and breach of trust in two separate cases. Netanyahu is suspected of accepting lavish gifts from billionaire friends, and promising to promote legislation to help a major Israeli newspaper against its free rival in exchange for favorable coverage. Longtime aide Ari Harow is a state witness in one of those cases.

In addition to the Bezeq case, police are investigating reports that Hefetz attempted to bribe a judge with an offer to become attorney general if she dismissed a case against Netanyahu's wife, Sara Netanyahu.

The prime minister has denied wrongdoing in all of the cases, saying he is the victim of a politically motivated witch hunt aimed at toppling him.
Corruption Israel News Desk
Reactions: