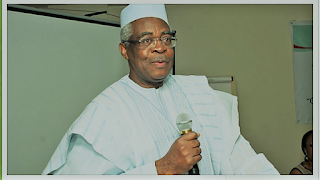 Image Via The Cable

TARABA (THE CABLE) -- Theophilus Danjuma, a former minister of defence, has asked Nigerians to defend themselves against killers.

Danajuma said this on Saturday while speaking at the maiden convocation of Taraba State University.

He said the army and other security agencies colluded with killers to attack Nigerians.

The retired general accused the army of “bias”, saying it has failed in its responsibility of securing the country from attacks.

“[The armed forces] are no longer neutral there is need for Nigerians to rise up and defend the country, defend the state and defend yourselves,” Danjuma said.

“If you depend on the armed forces to stop the killings you will all die one by one. The Nigeria armed forces are not neutral.”

The former minister said the killings in the country must stop, or else “Somalia will be a child’s play”.

Danjuma described Taraba as a “mini Nigeria” and said the peace of the state is under threat.

“Taraba is a mini Nigeria with diverse ethnic groups living together peacefully, but the peace in this state is under assault,” he said.

He said Nigerians must unite and resist any attempt that would frustrate the unity of the country.
News Desk Nigeria Society