After A Promise To Return African Artifacts, France Moves Toward A Plan 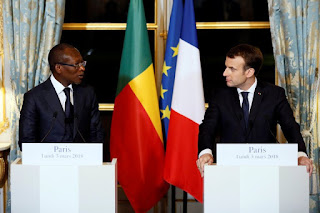 President Emmanuel Macron of France, right, and President Patrice Talon of Benin held a joint press conference after a meeting at the Élysée Palace in Paris on Monday. CreditPool photo by Etienne Laurent

PARIS, FRANCE (THE NEW YORK TIMES) -- President Emmanuel Macron of France announced on Monday his appointment of two experts to make plans for the repatriation of African artifacts held in French museums, following his pledge in November that “African heritage cannot be a prisoner of European museums.”

The Senegalese writer and economist Felwine Sarr and the French art historian Bénédicte Savoy will consult over the next few months and return their findings by November, Mr. Macron said.

Mr. Macron announced the appointments in a joint appearance with the president of Benin, Patrice Talon. Benin has long pushed for the return of artifacts that came to France after its invasion in 1892 and subsequent colonial rule.

In his speech on Nov. 28 at the University of Ouagadougou in Burkina Faso, Mr. Macron said, “African heritage must be highlighted in Paris, but also in Dakar, in Lagos, in Cotonou.” He added, “In the next five years, I want the conditions to be met for the temporary or permanent restitution of African heritage to Africa.”

Andrew Reid, a senior lecturer in African archaeology at University College London’s Institute of Archaeology, said in a telephone interview that the return of artifacts could be a form of soft diplomacy and an attempt to “generate political good will” in a region where China’s influence is rising.

In an editorial first published in the French newspaper Le Monde in January, Ms. Savoy wrote that Macron’s speech in Ouagadougou constituted a “revolution.” She wrote, “It draws strength from a generational shift, it suggests that sharing is possible, it presupposes the specificity of the African case and — contrary to expectations — it has not sparked the institutional outcry that we have been used to in recent years.”

Ms. Savoy added that Stéphane Martin, the director of the ethnographic Quai Branly-Jacques Chirac Museum in Paris, which holds some 70,000 artworks from sub-Saharan Africa, was an unexpected voice of support, saying, “nowadays we cannot have an entire continent deprived of its history and artistic genius.”

The French government has historically been hostile to the idea of restitution, claiming that once artifacts were put in museums, they were the property of the public.

Mr. Macron’s pledge is “a foolish promise,” said Simon Njami, editor of the Paris-based African art magazine Revue Noire and head curator of the 2016 Dakar Biennale. “How would one define what belongs to whom?”

Mr. Njami said that because African borders were drawn by European powers during the Berlin Conference of 1884-85 without reference to the boundaries that existed at the time, it would be hard to decide where older artifacts belong. He suggested France should fund exhibitions of the objects across Africa, but as for restitution, he said, “We can talk about it in seven years. Nothing will have moved.”
Africa France New York Times News Desk Society
Reactions: