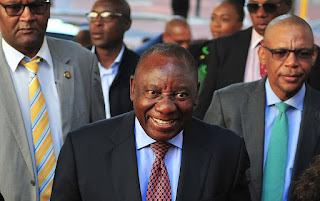 South African Deputy President and African National Congress party President Cyril Ramaphosa, arrives at the St. Georges Cathedral in Cape Town, South Africa, Sunday, Feb. 11, 2018 to attend a Mass to celebrate Nelson Mandela Centenary Celebrations on the 28th anniversary of Mandela's release from prison. The ANC will hold an emergency meeting on Monday as the nation awaits word on whether President Jacob Zuma will resign soon.


JOHANNESBURG (AP) — South Africa's deputy president says ruling party leaders who are scheduled to meet on Monday will finalize a power transition from President Jacob Zuma, who faces widespread calls to resign because of corruption scandals.

Deputy President Cyril Ramaphosa said Sunday that he understands South Africans want the country's leadership to resolve its problems and that the ANC party's national executive committee "will be doing precisely that."

Ramaphosa, who is expected to succeed Zuma, says discussions that he has held with Zuma had to be conducted with "care and purpose" and with the aim of uniting South Africans. The political opposition has criticized the private talks between Ramaphosa and Zuma, saying the president may have been pressing for immunity from prosecution in exchange for his resignation.
Africa Society South Africa The Associated Press