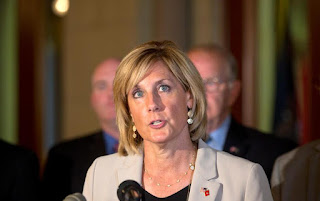 Assemblywoman Claudia Tenney, R-New Hartford, speaks during a news conference at the Capitol, in Albany, N.Y. The Republican congresswoman from upstate New York says "many" people who commit mass murder are Democrats. U.S. Rep. Tenney made the comment Wednesday, Feb. 21, 2018, on Talk 1300 Radio during a discussion about calls for stricter gun control since last week's deadly Florida high school shooting.

ALBANY, N.Y. (AP) — A Republican congresswoman from upstate New York said Wednesday that "many" people who commit mass murder turn out to be Democrats. U.S. Rep. Claudia Tenney made the remarks on Talk 1300 Radio during a discussion about calls for stricter gun control since last week's deadly Florida high school shooting.

"Yeah, well, obviously there is a lot of politics in it, and it's interesting that so many of these people that commit the mass murders end up being Democrats, but the media doesn't talk about that either," Tenney told talk show host Fred Dicker.

Tenney did not offer any evidence to support that statement. Democratic state Assemblyman Anthony Brindisi, who is opposing Tenney this fall, called her comments "disgusting" and "toxic" and urged her to apologize.

Evan Lukaske, a spokesman for the Democratic Congressional Campaign Committee, said Tenney demonstrated "how completely unfit she is to serve in Congress." In a statement Wednesday night, Tenney said her comments were taken out of context.

"I am fed up with the media and liberals attempting to politicize tragedies and demonize law-abiding gun owners and conservative Americans every time there is a horrible tragedy," she said. "While we know the perpetrators of these atrocities have a wide variety of political views, my comments are in response to a question about the failure to prosecute illegal gun crime. I will continue to stand up for law-abiding citizens who are smeared by anti-gun liberal elitists."

Tenney was first elected in 2016. Her district covers a large swath of central New York including the cities of Binghamton, Utica and Rome.
AP News News Desk Society
Reactions: