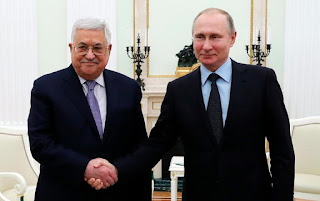 
MOSCOW (AP) — President Vladimir Putin on Monday passed greetings from U.S. President Donald Trump to the visiting Palestinian leader, who responded that he doesn't want to cooperate with Washington following its decision to recognize Jerusalem as the Israeli capital.

Speaking at the start of their meeting in the Kremlin, Putin told Palestinian President Mahmoud Abbas that he was just off the phone with Trump. "Naturally, we spoke about the Palestinian-Israeli settlement," he said. "I would like to convey to you his best wishes."

Abbas responded that the Palestinians don't want to cooperate with the United States as a sponsor of the peace process, but welcome multilateral cooperation. Trump honored a campaign promise in December by recognizing Jerusalem as Israel's capital and vowing to relocate the U.S. Embassy there.

The move outraged Palestinians and others across the Muslim world. Palestinian leaders have said it means that Washington can no longer serve as a Mideast peace broker. "We refuse to cooperate with the Americans as co-sponsors," Abbas told Putin in remarks carried by Russian news agencies. "President Trump again surprised us. His decision to move the U.S. Embassy to Jerusalem and consider Jerusalem the capital of Israel was like a slap in our face."
AP News Donald Trump Palestine Russia United States Vladimir Putin