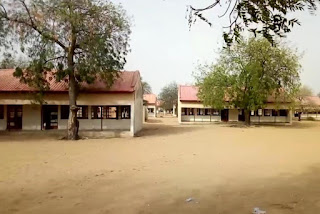 The fate of the girls is not known, but witnesses said the Islamic extremists specifically asked where the girls' school was located. Some eyewitnesses reporting seeing young women taken away at gunpoint.

Information Minister Lai Mohammed made the announcement Sunday after meetings were held with family members and others, some of whom have criticized the government for taking days to make such an announcement.

Air Force spokesman Olatokunbo Adesanya said in a press statement Sunday that "the renewed efforts at locating the girls are being conducted in close liaison with other surface security forces."

Many fear the girls were abducted as brides for Boko Haram extremists. The group kidnapped 276 girls from a boarding school in Chibok in 2014 and forced them to marry their captors. About 100 of the Chibok girls have never returned to their families in nearly four years.

The militants arrived Monday evening in the town of Dapchi in Nigeria's Yobe state, sending many fleeing into the surrounding bush amid the hail of gunfire. While Nigeria's president has called the girls' disappearances a "national disaster," local officials at first falsely indicated that some of those abducted were rescued while others were hiding and would return in the coming days.

Bashir Manzo, whose daughter Fatima is among the missing, said the chances the children are merely hiding in the bush are slim.

"All those that fled into the bush had been brought back to the school on Tuesday, and a roll call was taken after which they had all gone home to meet their parents," he said.

Nigeria's president said earlier no effort will be spared to locate them.

"The entire country stands as one with the girls' families, the government and the people of Yobe State. This is a national disaster. We are sorry that this could have happened and share your pain. We pray that our gallant armed forces will locate and safely return your missing family members," President Muhammadu Buhari said earlier in the week.