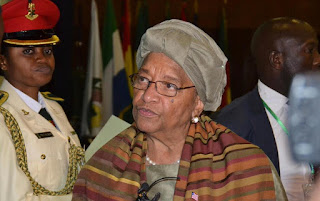 DAKAR, SENEGAL (AP) — Former Liberian President Ellen Johnson Sirleaf has been awarded a $5 million African Leadership prize by the Mo Ibrahim Foundation which honors role models on a continent where many leaders have stayed in power for decades, the foundation said Monday.

Sirleaf, a Nobel Peace Prize laureate and Africa's first female president, is also the first female and only the fifth person to receive the Ibrahim leadership award since it was established in 2006. The prize committee on Monday praised Sirleaf's "exceptional and transformative leadership, in the face of unprecedented and renewed challenges" in leading Liberia's recovery following years of civil war.

Sirleaf, who was Liberia's president from 2006 through 2017, stepped down in January, handing power to President George Weah. She lifted Liberia from the destruction of back-to-back civil wars and saw it through an Ebola outbreak that killed nearly 5,000 Liberians in 2014-2015.

"Throughout her two terms in office, she worked tirelessly on behalf of the people of Liberia," said prize committee chair Salim Ahmed Salim. "In very difficult circumstances, she helped guide her nation toward a peaceful and democratic future, paving the way for her successor to follow. I am proud to see the first woman Ibrahim laureate, and I hope Ellen Johnson Sirleaf will continue to inspire women in Africa and beyond."

Although Sirleaf has been criticized for not being tough on corruption, the Mo Ibrahim foundation said that her record of government was good, highlighting that since 2006 Liberia was the only country out of Africa's 54 nations to improve in every category and sub-category of the Ibrahim Index of African Governance.

Candidates are African heads of state or government who have left office in the past three years, been democratically elected and served their constitutionally mandated term. They must also show "exceptional leadership."

The last award was given in 2014 to Hifikepunye Pohamba of Namibia. Previous winners also include former leaders of Cape Verde, Botswana and Mozambique. Former South African leader Nelson Mandela was named the inaugural honorary laureate in 2007.

The prize pays out the money over 10 years and $200,000 annually for life thereafter, the foundation said. It also considers granting $200,000 per year toward public interest activities supported by the laureate.
Africa AP News Ellen Johnson Sirleaf Liberia Society West Africa