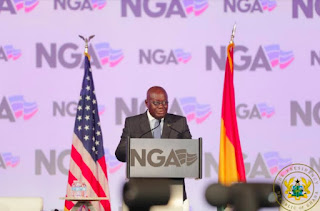 WASHINGTON (GHANA WEB) -- “There is a lot of opportunity for American capital, technology and enterprise in Ghana, and, indeed, in Africa, and we welcome companies from all your states to participate in the exceptional opportunities that exist in our country and on the continent.”

These were the words of the President of the Republic, Nana Addo Dankwa Akufo-Addo, when he delivered the keynote address at the National Governors Association 2018 Winter Meeting, in Washington DC, United States of America, on Sunday, 25th February 2018.

With President Akufo-Addo becoming the first African leader to address to address the 50 US Governors at an NGA meeting, he noted that a key challenge of Ghana’s economy, like many other economies in Africa, is the infrastructural deficit.

He told the Governors that Ghana is embarking e embarking on an aggressive public-private-partnership programme to attract investment in the development of both road and railway infrastructure.

“We are hopeful that, with solid private sector participation, we can develop a modern railway network with strong production centre linkages, and with the potential to connect us to our neighbours to the north, i.e. Burkina Faso, the west, i.e. Cote d’Ivoire, and to the east, Togo,” he said.

Apart from prosecuting the agenda of building, with the private sector, at least one factory in each district of Ghana, the President indicated that the time has come for Ghana to develop strategic industries out of its abundant natural resources of bauxite and iron ore.

To this end, “we shall, shortly, establish an Integrated Bauxite/Aluminium Development Authority to assemble the relevant financial resources for the systematic exploitation and development of our bauxite deposits.”

By the same token, President Akufo-Addo added that “we have decided to exploit our substantial iron ore and manganese deposits, situated in the Western and Northern regions of our country, to build an integrated steel industry to serve the needs of our country and region.”

President Akufo-Addo stressed that the time has come for a new form of relationship between Ghana and the United States of America “characterised by a substantial increase in trade and investment co-operation.”

According to the President, “this is the way to develop healthy relations between our two countries, and, thereby, strengthen our economies, and raise the living standards of our two peoples.”

Whilst expressing the appreciation of Ghana for the continuing support offered to the country, and to the financing of the nation’s budgets by the American people and their government, President Akufo-Addo noted that this mindset of dependency “is unhealthy both for the giver and for the receiver.”

The President also used the opportunity to reaffirm the commitment of his government and the people of Ghana in standing shoulder to shoulder with the United States in the promotion of human rights on the African continent, and across the globe.

“We stand shoulder to shoulder with the United States in the rejection of terrorism as a legitimate means of resolving political issues. We appreciate the courageous commitment and the lead role being played in the fight against terrorism by the United States in several parts of the world, including the Sahel region of West Africa,” the President said.

He continued, “We stand shoulder to shoulder with the United States in attempting to develop our economies to provide opportunities for its citizens to fulfil their aspirations, especially the youth. We stand ready to renew and deepen our relations with the United States of America for the prosperity and progress of our two peoples.”
Africa Ghana Society
Reactions: