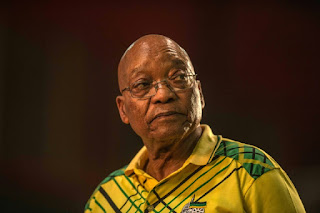 Jacob Zuma, pictured in 2017, is embroiled in a corruption probe. Image: Mujahid Safodien/AFP


SOUTH AFRICA (AFP) -- South Africa has widened a corruption probe into allies of ex-president Jacob Zuma to other countries including India, China and Dubai, the police minister said Sunday.

Fikile Mbalula made the announcement days after South Africa issued an arrest warrant for one of the brothers of the Gupta business family, close associates of scandal-plagued Zuma who was forced from power on Wednesday.

Mbalula told public broadcaster SABC that Ajay Gupta and another four people who are being sought in connection with the case were all out of the country.

While there was no indication that they fled the country fearing arrest, Mbalula vowed that they will “be followed up” through Interpol with the possibility of extradition to face trial in South Africa.

He said two of the suspects were of Indian descent and one other was Chinese. All are thought to be in India, China or Dubai.

“We operate through Interpol, we operate through bilateral (means), if you ever resist there will be extradition. All means necessary will be employed to ensure these people are brought to book,” said Mbalula.

He refused to name the suspects except for Ajay Gupta who police last week declared a fugitive.

Local media reports suggested that Zuma’s son Duduzane, a business associate of the Guptas, is also among those being sought, and some speculated that he could be in Dubai.

The minister refused to say whether Duduzane Zuma is on the police wanted list.

“There will be more arrests… it’s not just a witch hunt,” he added.

In all, 13 people are facing charges linked to allegations that millions of dollars of public money meant for poor dairy farmers was syphoned off by the Guptas. Eight other suspects were arrested last week and have appeared in court.

In his first address to the nation hours after he assumed power on Friday, new South African President Cyril Ramaphosa vowed to fight corruption in a direct reference to the accusations levelled at his predecessor Zuma.