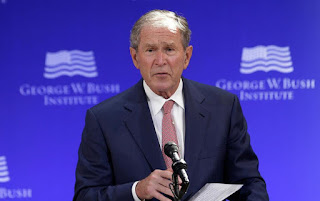 Former U.S. President George W. Bush speaks at a forum sponsored by the George W. Bush Institute in New York. Bush spoke Thursday at a summit in Abu Dhabi put on by the Milken Institute, an economic think tank based in Santa Monica, California.

While not directly naming President Donald Trump, it appeared Bush was targeting him in his comments. Bush in 2008 became the first sitting U.S. president to visit the UAE. Bush spoke on Thursday at a summit in Abu Dhabi put on by the Milken Institute, an economic think tank based in California.
Electoral Mess George Bush News Desk Russia United States