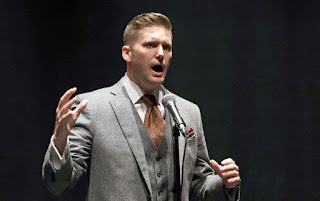 White nationalist Richard Spencer speaks at the University of Florida in Gainesville, Fla. Kent State University in Kent, Ohio, faced a deadline Friday, Feb. 9, 2018, to agree to rent space for Spencer's campus tour at an "acceptable date and time," or become the latest university to face a lawsuit over the tour. Tour organizer Cameron Padgett wanted Spencer to speak at the Ohio school on May 4, 2018, the anniversary of shootings that killed four students during Vietnam war protests in 1970, but the university said it couldn't accept the request because early May was too busy with activities around the end of the academic year.

CINCINNATI (AP) — An attorney for Richard Spencer said Monday the white nationalist's plan to speak on the University of Cincinnati campus during spring break has been scuttled by a legal standoff over the Ohio school's demand for a security fee of nearly $11,000.

Attorney Kyle Bristow told The Associated Press that Spencer's tour organizer, Cameron Padgett, is now hoping that the appearance can be rescheduled for summer or fall. A message was left Monday for a UC spokesman.

The school agreed last October to allow Spencer's appearance. At the time, UC's board of trustees condemned hate, but cited the fundamental right to free speech at a public university. Bristow then said Spencer would speak March 14, while students are on spring break, but no contract was agreed upon after the school insisted on the security fee that Spencer's side said was discriminatory and unconstitutional. They filed a federal lawsuit, which the school asked a judge to dismiss.

Bristow has sued several other schools, including Ohio State University, for not allowing Spencer to speak. His next potential target for litigation is Kent State University, after the northeast Ohio school on Friday repeated that no suitable space was available for Spencer to speak there this spring. Bristow said he is tied up with other cases, but plans to sue if they don't agree to a Spencer appearance.

"I will not tolerate left-wing university bureaucrats spitting upon the First Amendment rights of right-wingers," Bristow said by email, then paraphrasing a line from HBO's "Game of Thrones" series, he wrote: "I will make Kent State University's administrators bend the knee like the others."

In a Jan. 4 letter to Bristow, UC General Counsel Lori Ross said the school had begun "preliminary preparations" for a March 14 appearance, but that much remained to be done. She told Bristow that the school needed to have a signed rental agreement, insurance certificate and total $11,333 payment for rental and security by Jan. 12. The letter was obtained by The Associated Press through a public records request.

Bristow responded with the Jan. 9 federal lawsuit seeking a "reasonable fee." The school said it was asking for "a mere fraction" of anticipated costs. Authorities estimated security costs at $600,000 for Spencer's Oct. 19 appearance at the University of Florida.

Spencer was a scheduled speaker at a "Unite the Right" rally in Charlottesville, Virginia, last August that led to deadly violence when a man struck and killed a protester with his car. Spencer has popularized the term "alt-right" to refer to a fringe movement that's a mix of white nationalist, white supremacist, anti-Semitic and anti-immigrant beliefs.