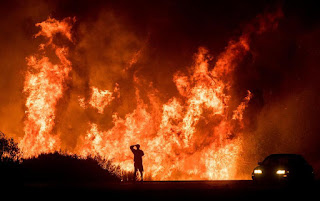 A motorists on Highway 101 watches flames from the Thomas fire leap above the roadway north of Ventura, Calif. President Donald Trump has declared a major disaster in California over a wildfire that destroyed more than 1,000 buildings. The White House announced Tuesday, Jan. 2, 2018, that the president has granted disaster status, which will help make federal funds available to supplement recovery efforts in the wake of the Thomas Fire that ravaged Santa Barbara and Ventura counties.

VENTURA, CALIF. (AP) — President Donald Trump on Tuesday declared a major disaster in California over a wildfire that destroyed more than 1,000 buildings as fierce winds whipped it through Ventura and Santa Barbara counties last month.

The declaration makes federal funding available to state and local governments and some nonprofit organizations for emergency work in those counties and statewide for work to reduce hazards related to the fire, according to a White House statement.

The Thomas fire that began on Dec. 4 is the largest recorded in the state. It was 92 percent contained on Tuesday. Firefighters were still putting out hot spots and smoldering areas. The fire covered more than 440 square miles (1,140 sq. kilometers), killed two people, destroyed entire neighborhoods, threatened coastal foothill communities, ravaged wilderness areas and cast a pall of smoke that shuttered businesses in downtown Santa Barbara.

Firefighting costs alone have approached $200 million. The disaster declaration means the federal government may cover 75 percent of those costs and the costs of recovering from the blaze, such as removing vast amounts of debris in fire-denuded areas that could be hit with flash floods and debris flows if winter rains arrive.

After a flight over the devastated area on Tuesday, Department of Homeland Security Secretary Kirstjen M. Nielsen said the president's declaration will help with rebuilding from the fire, which burned more than 700 homes along with other buildings.

"Seeing the devastation, I'm deeply moved," she said. "My heart goes out to the survivors. We met with some of them today." On Wednesday, she was expected to visit Santa Rosa in Sonoma County. Wildfires in October swept through Sonoma, Napa and other counties in and around wine country, killing 44 people and destroying more than 5,000 homes. Insured damages alone topped $9 billion.

"It is expected many of the survivors in the impacted communities will have no insurance coverage or be underinsured," Brown's request said. "Even for those survivors who have insurance coverage, major challenges remain to obtain temporary housing and attempt to rebuild their lives."

Although Tuesday's declaration only covers Ventura and Santa Barbara counties, "damage assessments are continuing in other areas, and more counties and additional forms of assistance may be designated after the assessments are fully completed," the White House statement said.
AP News California News Desk Society
Reactions: 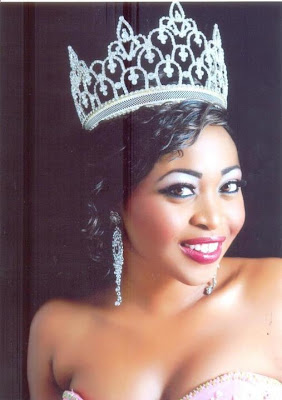 Claret Onukogu is Ph.D candidate at Walden University and aspires to be a film-maker and interest in working for the United Nations. In this interview, she talks about her growing up, going to school in Nigeria, Nollywood and her problems with the Miss Nigeria In America Beauty Pageant since her crown. Excerpts: Tell me about yourself. I am the first child from a family of 8 and a native of Imo State, Nigeria who resides in the United States. I am an MBA/ Healthcare Administration degree holder from South University in Savannah, Georgia, and a PhD candidate from Walden University. I am also one of the new faces and rising stars in Nollywood with work ranging in cinema, soap-opera, home-videos, and co-host of a television show (music and vibes). Some of my awards include Who’s Who among American High School students, Who’s Who among American College students, Certificates of Academic Excellence, Outstanding French Student, National Dean’s List (sophomore), Minority Academic