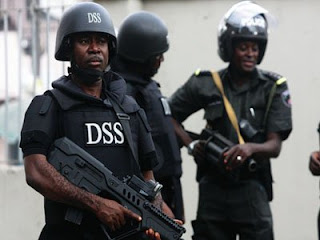 Image Via The Nation

Reports from the area have it that the soldiers, Policemen and officials of the DSS who came in about 8 Hilux vans raided the Jewish worship center and arrested wife of the Priest in-charge of the synagogue and a worshiper.

The security agents according to information available to The Nation, reveals that the security personnel also arrested an Abuja based Hebrew teacher who was at the synagogue to teach members of the faith, Hebrew language.

Some of the Jewish worshippers who spoke to our reporter over the development claimed that the security team also made away with Torah and Tanakh; Jewish study books during the raid.

They also claimed that the suspects were taken to the Aba Central Police Station where they were being unlawfully detained by the police.

They claimed that the security agents by their actions have desecrated the “Holy of the Holies of synagogue because they were not sanctified before entering into the Holy Place”.

“I am sure that the security agencies would not have invaded their worship centers in the manner that they invaded our center. But simply because we are perceived to be in the minority, they decided to invade our worship center the way they did. Our religion is just for IPOB members, but for everyone. It is like the church where every person is allowed to come and pray just like Christians and Muslims do.

“Why would they just invade here and took away our Torah and Tanakh? It shows that they don’t have respect for the Creator?

A member who gave his name as Gideon said that there was no amount of intimidation from the security agents would deter them from worshipping their God as long as what they are doing is lawful.

Efforts to reach Abia State Commissioner of Police, CP Anthony Ogbizi and the Command’s spokesman, DSP Geoffrey Ogbonna for comments failed as they were yet to pick several calls placed on their mobile phones.
Nigeria Society The Nation