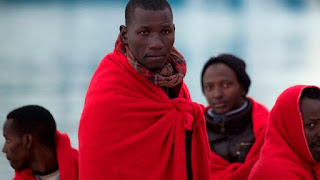 MADRID, SPAIN (THE TIMES UK) -- People traffickers are adopting the tactics of drug smugglers as migrants increasingly make Spain the route into Europe.

Figures released yesterday showed that 22,900 people arrived in Spain from Morocco or Algeria last year, more than double the previous year, according to Frontex, Europe’s border agency, although estimates vary.

By contrast, chaos in Libya led to arrivals in Italy falling by more than a third and tighter controls in Turkey meant that arrivals in Greece were down by more than 70 per cent on the previous year.

Fabrice Leggeri, the head of Frontex, said that he expected crossing attempts to increase this year. The agency was finalising plans to start a permanent border operation in the western Mediterranean and to increase the use of air surveillance.

Mr Leggeri said that traffickers had started to use the kind of fast launches used by drug smugglers, which can pack in more migrants than flimsy inflatables and which could more easily evade patrols.

Political upheaval in Morocco’s Rif region, along with Spain’s economic recovery, have played a key role in making the Iberian peninsula more attractive to migrants. Nearly 40 per cent of those who were stopped while trying to cross the sea to Spain were from Algeria or Morocco.

Overall the numbers fleeing war or poverty in Africa in search of a new life in Europe by crossing the Mediterranean halved last year, with 171,635 arrivals by boat, compared with 363,504 in 2016, according to the International Organisation for Migration).

The increase in arrivals in Spain has worried observers, who claim that the EU is failing to tackle the underlying problems that drive migration.

“The gangs are just changing routes to Spain when tougher controls are introduced in Italy or Greece. This will just carry on unless government policies are changed,” said Estrella Galán, secretary-general of Cear, an organisation working with asylum seekers. “Governments need to tackle the causes of migration, decriminalise it and introduce a visa system.”

Migrants heading to Spain arrive on beaches in Tarifa, Malaga, Almeria, Motril and Murcia. Spanish police believe that migrants pay traffickers up to €3,000 for a seat in a boat. At least 223 died trying to reach Spain last year compared with 116 the year before.

Last week seven migrants died from exhaustion, hypothermia and starvation in a boat that was found off a beach in Lanzarote in the Canary Islands. Two alleged traffickers were arrested.

José Antonio Nieto, secretary of state for security, said Spain was working with Morocco and Algeria to combat people traffickers. “Chasing mafias and human trafficking networks is the top priority,” he said.