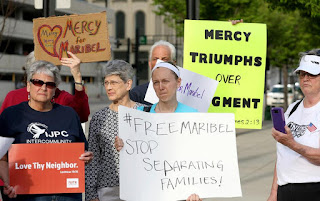 Nuns on the Bus, The Intercommunity Justice and Peace Center (IJPC) and other community members protest in Cincinnati against the deportation of Maribel Trujillo Diaz in Cincinnati. A federal appeals court is ordering U.S. immigration authorities to reconsider the case of Diaz, a Mexican mother of four U.S.-born children, who was deported last year while claiming she faced targeting by a Mexican drug cartel. A three-judge panel of the Cincinnati-based 6th U.S. Circuit Court of Appeals ruled Wednesday, Jan. 17, 2018, in favor of Diaz. (Cara Owsley/The Cincinnati Enquirer via AP, File)

CINCINNATI (AP) — A federal appeals court on Wednesday ordered U.S. immigration authorities to reconsider the case of a Mexican mother of four U.S.-born children who was deported last year while claiming she was threatened by a Mexican drug cartel.

A three-judge panel of the Cincinnati-based 6th U.S. Circuit Court of Appeals ruled in favor of Maribel Trujillo Diaz. It said the Board of Immigration Appeals shouldn't have rejected her motion to reopen removal proceedings based on new testimony about threats against her and her family by the Knights Templar cartel.

Trujillo Diaz's father gave a sworn statement that he was kidnapped by drug gang members in 2014 seeking revenge because his son had refused to work for a related drug cartel and fled the country. The father said the members told him they "knew Maribel had gone to the United States" and warned that "the whole family would suffer."

The immigration appeals board had called her fears "generalized, conclusory speculation." The appeals court opinion said the board didn't make any findings that her father's statements were unbelievable or inconsistent with other evidence.

"The BIA abused its discretion in finding that Trujillo Diaz failed to present (sufficient) evidence that her fear of persecution, or the threat to her life or freedom, was related to her family membership," Bush wrote.

Khaalid Walls, a Detroit-based spokesman for U.S. Immigration and Customs Enforcement, declined to comment Wednesday on "pending litigation." Diaz' attorneys said in a statement Wednesday that they are "thrilled" at the court's ruling.

Trujillo Diaz had filed her motion just weeks before her April 19 deportation. The 6th Circuit in April had denied her request to block the deportation.