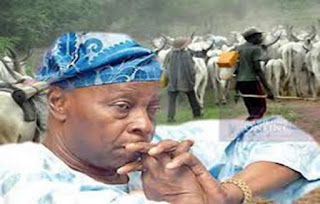 
AKURE, ONDO STATE (INDEPENDENT, NIGERIA)  – Former Secretary to the Government of the Federation (SGF), Chief Olu Falae, on Monday reacted to the burning of his farm by suspected herdsmen.

Falae said the incident was an attempt to kill him, lamenting that the herders were now treating his farm as their cattle colony.

“I have been at the receiving end for long. Even after I was kidnapped, they came back and killed one of my guards. It remains an unsolved case of murder.


“I believe if they had met me in the farm, they would have hurt me. To burn palm trees amounts to an act of malice and hatred.

“I believe they have malice against me and they hate me. That is why they will burn, uproot the palm trees I planted and throw the seedlings away.

“I’ve reported to the police over 10 times. Elements of the same people kidnapped me.

“Every year, they set fire on my farm. Do you know why? They burn this farm because the grass is already dry and cows don’t like that.

“So, they burn the grass and in two weeks time, fresh grass will grow and their cattle will have fresh grass to eat. In order word, they are already treating my farm as if it was their colony,” Falae said.

The former minister, who spoke after an assessment tour of the burnt farm, expressed disappointment over the continued silence of President Muhammadu Buhari on incessant attacks on farmers and their farms in the country.


Falae said he expected the President to have come up with measures that could prevent the herdsmen from terrorising the people of the country.

He said: “I have expected him (Buhari) for over two years to take an initiative and make a national broadcast to his people in Nigeria and assure us that he will handle the matter.

“I have expected him to announce effective measures that could control the capacity of the herdsmen and assure that both the herdsmen and us can live together in peace without one side damaging the other. I am disappointed.”

“If I were President, I would have taken the initiative because this is not a problem that cannot be solved. Many nations have gone through this.

“This mode of cattle rearing is universal but in the last hundred years, most nations have solved the problem by adopting ranching.

“The elder statesman vowed to join hands with other leaders from the South West zone to ensure that “There is no cattle colony in
Yorubaland.”