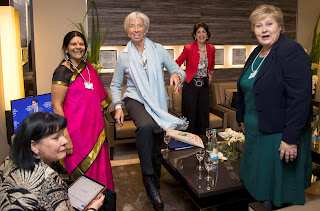 Christine Lagarde reacts after kicking a football given her by Erna Solberg (right), while Sharan Burrow, Chetna Sinha and Fabiola Gianotti watches in Davos, Switzerland January 23, 2018

After the #MeToo campaign gripped Hollywood in 2017, scrutiny turned to the World Economic Forum (WEF) this week to see whether the movement against sexual harassment and discrimination could conquer the business world too.


But the stereotype of “Davos Man” — the dark-suited business figure ubiquitous at the forum — is alive and well. His species still far outnumbers Davos Woman.

At first glance the forum recognises the prevailing winds: it named only women as the seven honorary co-chairs at its annual gathering of top executives and leaders in the Swiss resort.

All of them have taken the stage at discussions in Davos to welcome the progress made and flag the uphill struggle that remains.

The forum admits that women still accounted for only 21 per cent of the Davos participants, who are drawn mostly from the business world.

One of the co-chairs, International Monetary Fund chief Christine Lagarde, called in Davos for action to “empower women and turn this anger that we have seen into action”.

“My hope is that we can collectively demonstrate that even without testosterone we can actually produce a positive, constructive energy to deliver solutions.”

The share of women participants at Davos has crept up only slightly over recent years, from 18 per cent in 2016 to 20 per cent last year.

The four-day Davos schedule this week includes debates on gender-related issues such as harassment and wage equality.

“For some industries there is a pipeline problem. There are not enough women going into a particular sector. In other industries it is because they don’t have a level playing field even though there are large numbers of women inside those organisations,” she told AFP.

“So we are going to be working with a range of industries on very tailored approaches for each one of them.”

As well as agitating the economically liberal Davos delegates with his protectionist policies, US President Donald Trump’s appearance at the forum, expected on Friday, is raising discussion about sexism.

During his election campaign, Trump was heard boasting in leaked recordings about groping women, and caused outrage with insults directed at a former beauty queen.

“The rise of the alpha male in terms of government leaders has created a wave of misogyny that’s kind of legitimating what’s already there,” said another of the co-chairs, Sharan Burrow, general secretary of the International Trade Union Confederation.

“We have to recreate an environment where women are respected.”

A study published by the WEF found that gender inequality increased in 2017 for the first time in a decade.

It estimated that at the current rate it would take 217 years to close the wage gap between men and women.

“We want to see action.”
Pat Milligan, an executive from the human resources firm Mercer, insisted there were “tremendous efforts from some companies” to break the glass ceiling for women in business — including in some cases using software designed to help harden up female candidates’ job applications.