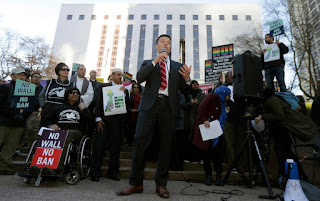 Washington Solicitor General Noah Purcell, center, speaks during a protest rally, Wednesday, Dec. 6, 2017, outside a federal courthouse in Seattle. The U.S. Supreme Court decision allowing President Donald Trump's third travel ban to take effect has intensified the attention on a legal showdown Wednesday before three judges in Seattle who have been cool to the policy as they hear arguments in Hawaii's challenge to the ban, which restricts travel to the United States by residents of six mostly Muslim countries and has been reviled by critics as discriminatory.

WASHINGTON (AP) — The State Department says President Donald Trump's travel ban on citizens of six mainly Muslim countries, North Korea and Venezuela is now fully operational. The announcement follows the Supreme Court's decision earlier this week to allow enforcement of the ban as it is challenged in lower courts.

The department said it began fully implementing the ban at the opening of business at all U.S. embassies and consulates on Friday. The ban restricts citizens Chad, Iran, Libya, North Korea, Syria, Somalia and Yemen from getting U.S. visas. Some Venezuelan officials are also covered.

The administration says the restrictions are based on an assessment of each country's security situation and its willingness to share information. Critics say the measure is an attempt to bar Muslims from coming to the U.S.