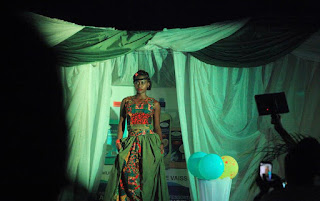 A model display a creation by Miki Sikabwe during a fashion show in Beni Eastern Congo . Young Congolese designer Miki Sikabwe has trained in Rwanda, Burundi and Kenya, but hasn't gotten the chance to show her work locally in eastern Congo for years because of insecurity.

BENI, CONGO (AP) — Congolese designer Miki Sikabwe has trained in Rwanda, Burundi and Kenya but never had the chance to show her work at home because of insecurity. That changed over the weekend, when a handful of designers presented the first fashion shows in eastern Congo's city of Beni in years. It was a welcome distraction for residents who have faced attacks by Allied Democratic Forces rebels and other armed groups that have killed thousands over the past three years.

"I am happy to be exhibiting my necklaces and clothes made with local products here in Beni and I believe this will give hope to the people here," Sikabwe said, also showing off men's clothing made from bright African wax prints.

She and thousands of others in eastern Congo have wondered when the violence will end. Earlier this month, ADF rebels attacked the local United Nations mission, killing 15 Tanzanian peacekeepers and five Congolese soldiers in the single deadliest assault on a U.N. peacekeeping mission in nearly 25 years.

Uganda and Congo have launched a joint military offensive against the rebels, bringing optimism to a region that has known violence for decades. Beni's fashion week was canceled in 2014 after rebel attacks began in earnest, killing some 1,000 people within months.

Mayor Nyonyi Bwanakawa said he believes the city is becoming safer. "We would like to show the world that in Beni, and in northeast Congo, there is life and tourists can come here," he said. Beni lies at the foot of Mount Ruwenzori, which is surrounded by the well-known Virunga National Park.

Over the weekend, nearly 600 people packed into a nightclub for the fashion show featuring colored loincloths, masks and traditional materials designed into modern styles. Roselyne Mbiya was the lead designer, using Congolese fabrics mixed with floral designs and lace.

She said some of the show's proceeds will go to women who have been raped by the ADF rebels, saying they need to feel they are still loved by society.
Africa AP News Congo Fashion Society
Reactions: