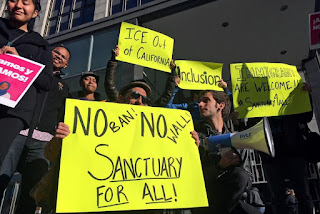 In this April 14, 2017, file photo, protesters hold up signs outside a courthouse where a federal judge was to hear arguments in the first lawsuit challenging President Donald Trump's executive order to withhold funding from communities that limit cooperation with immigration authorities in San Francisco. California state lawmakers passed and Gov. Jerry Brown signed nearly 900 new laws in 2017, most of which take effect Jan. 1, 2018. Among them is one making California a sanctuary state in response to the Trump administration's immigration crackdown. (AP Photo/Haven Daley, File) The Associated Press

The Guardian From Uduma Kalu, Literary Correspondent, Enugu DARKNESS fell again in the Nigerian literary firmament yesterday when veteran novelist, pharmacist and public commentator, Cyprian Ekwensi passed on. He was 86 years old. The author of the popular Jaguar Nana series of novels was said to have died at the Niger Foundation in Enugu where he underwent an operation for an undisclosed ailment. It was not clear as at press time yesterday if he died during or after the operation. Earlier this year, Ekwensi released Cash on Delivery, a collection of short stories, which turned out to be his last book. When he turned 86 last year, the Association of Nigerian Authors (ANA), Lagos State chapter and the Committee for Relevant Arts (CORA), feted him. Ekwensi was celebrated as the forefather of the city novel. He is believed to be the author of the earliest published fiction on social life in the Lagos Metropolis. The accomplished novelist is remarkable for his down-to-earth style of writin