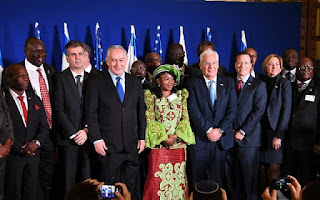 AFRICA-USAID (THE TIMES OF ISRAEL) -- Israel on Monday officially joined a US-led initiative to connect millions of Africans to electricity, with Prime Minister Benjamin Netanyahu hailing the “growing partnership” between the Jewish state and its neighboring continent.

Israel and the US signed a memorandum of understanding that sees Israel join the United States Agency for International Development’s (USAID) Power Africa initiative, an international program that aims to connect 60 million households in Africa to the electric grid by 2030.

“Every time that an African mother will turn on the light or turn on a heater for some water for her children, part of Israel will be there,” Netanyahu said. “It’s a great, great development.”

Netanyahu expressed hope that the “wonderful partnership” Israel and African nations shared in the 1960s, later “derailed” by the Israeli-Arab conflict, was “now back on track in full force.”

He also turned to scripture to illustrate the magnitude of the undertaking.

“In the beginning of the Bible, there are two words in Hebrew… It takes four words to say it in English, but I’ll say it and it summarizes everything that we’re doing here: Let there be light.”

Israeli solar energy pioneer Yosef Abramowitz said last week the deal could lead “to billions of dollars of deal-flow for Israeli firms.” Abramowitz’s firm, Energiya Global Capital, is one of the founding partners of Power Africa. It is already working with the US and Israeli governments to deploy $2 billion in solar and wind installations in 10 countries in Africa over the next five years.

Netanyahu in July 2016 became the first Israeli premier in decades to travel to the continent, when he visited four East African nations: Uganda, Kenya, Rwanda and Ethiopia in a bid to forge closer ties with the Africa.

Last week, Netanyahu announced that Israel would open an embassy in Rwanda as “part of the expansion of Israel’s presence in Africa and of the deepening cooperation between Israel and African countries.”

Some 600 million people, or 70 percent of the population of sub-Saharan Africa are without electricity. Power Africa, one of the biggest private-public development programs ever launched in the world, started its activities in 2013 with the aim of addressing poverty in Africa by adding more than 30,000 megawatts (MW) of cleaner, more efficient electricity generation capacity and 60 million new home and business connections.

Making use of its global partners and those on the ground, the organization addresses bureaucratic impediments that could stall projects, provides companies with on-the-ground support to implement solutions, and helps find financing to lower the risk of investments — so that public and private investors will fund the projects that drive electricity reforms and work with African governments to push ahead with policy reforms to promote the power sector.