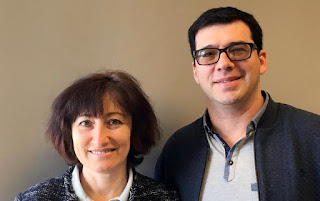 Rita Tsalyuk, left, and Kirill Merkulov pose for a photo Monday, Dec. 11, 2017, in Denver, at their business "Coffee Joint." They hope the coffee shop will be among the nation's first legal marijuana clubs and applied this month for a license with the city of Denver.

DENVER (AP) — Colorado's largest city is reviewing the first application from a business seeking to be among the nation's first legal marijuana clubs, a step that comes more than a year after voters approved a bring-your-own pot measure.

Dan Rowland, a spokesman for the Denver department that regulates marijuana businesses, said the city received the application from the Coffee Joint on Friday. Co-owners Rita Tsalyuk and Kirill Merkulov plan to charge a $5 entry fee if they're approved for the license. Customers could use edible pot products or vaporizing pens inside, and the shop would sell food, host events and provide free coffee or tea, she said.

Denver voters approved the clubs in a 2016 ballot measure, but it took nine months for the city to start accepting applications. Advocates have complained that state restrictions preventing pot use at any business with a liquor license and the city's own rules unfairly limited potential locations for the clubs.

For instance, the city required pot clubs to be twice as far from schools and anywhere else children gather as liquor stores. Customers buying marijuana products often ask where they are allowed to legally use it, and employees have few answers for tourists staying in hotels that ban marijuana use, Tsalyuk said.

Colorado law doesn't address pot clubs. In some cities, they are tolerated, while others operate secretly. Other states with legal marijuana are at a standstill for developing rules governing places to consume pot products, including Alaska, where state regulators have delayed discussion of rules for retail shops until spring.

It could be months before Denver residents and tourists would be allowed to legally vape or eat pot products at the Coffee Joint. The city said it has just started to review the application and a public hearing will probably be scheduled within two to three months.

In the meantime, Tsalyuk and Merkulov want to open their business before the end of the year as a traditional coffee shop. For their 1,850-square-foot space, they plan to convert a garage to a space for "vape and paint" events, open a smaller room for private events and put in comfortable furniture.

"We want to give a better name to the cannabis industry and be good for residents, too," Tsalyuk said. The proposal has the backing of a local neighborhood association, which submitted a letter of support to the city. Applicants have to show community support for their proposal as part of the licensing process.

Aubrey Lavizzo, a member of the La Alma Lincoln Park Neighborhood Association, said the club backers attended two of their meetings and invited members to tour the dispensary. "They've shown us that they really want to be good neighbors," said Lavizzo, a veterinarian who has had a clinic in the neighborhood for over 30 years.

Merkulov said they are aware of the national and global spotlight on the industry. "It's a new apex," he said. "We hope to prove this can be managed well and be safe."