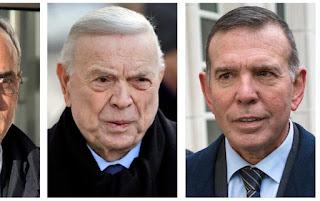 In these 2017 file photo, three former South American soccer officials, from left, Manuel Burga, of Peru; Jose Maria Marin, of Brazil; and Juan Angel Napout, of Paraguay, accused of accepting millions of dollars in bribes, are shown outside federal court in the Brooklyn borough of New York. The three are among the more than 40 soccer officials, businessmen and entities charged in a scandal that's shaken FIFA, soccer's governing body.

NEW YORK (AP) — Two former South American soccer officials have been convicted of corruption charges at a U.S. trial stemming from the FIFA bribery scandal, while deliberations will continue next week for a third official.

A federal jury deliberated a week before reaching a partial verdict Friday in New York. Jose Maria Marin, of Brazil, and Juan Angel Napout, of Paraguay, were convicted of racketeering conspiracy. Jurors remain undecided on Manuel Burga, of Peru.

The three had been arrested in 2015. Prosecutors accused them of agreeing to take millions of dollars in bribes from marketing firms seeking commercial rights to big soccer tournaments. Jurors heard the testimony of businessmen who pleaded guilty. Defense attorneys argued that the cooperators couldn't be trusted.
Ahia Mgbede AP News FIFA Sports
Reactions: 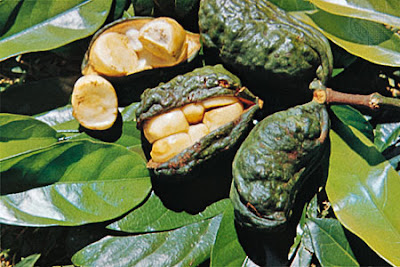 The Kola Nut As An Igbo Cultural And Social Symbol

BY FADA JON OFOEGBU UKAEGBU, Ph.D Preface On account of the multi-referential nature of Igbo cultural symbols, a number of the earlier scholars on Igbo culture confused the sacred and profane, the religious, social and political. Bishop A.K. Obiefuna testifies to this by saying that "In traditional Igbo life no distinctions were made between the sacred and profane, fact and fiction, history and poetry, all served the same purpose in a world where the natural and the supernatural interchanged hands..."[1] It is an exaggeration to say that there was no distinction between fact and fiction in traditional lgbo society. Nevertheless, there is a natural union or marriage between the natural and supernatural in the Igbo society; and this phenomenon confirms the truth that religion is natural to man. The fact that most social symbols are associated with religion does not ritualize them or make them become religious symbols. This aspect of the union between the religious and pr